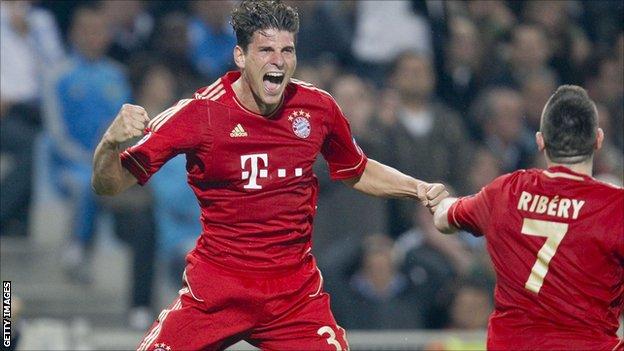 Bayern Munich took a major step to securing a place in the semi-finals of the Champions League with a comfortable away victory at Marseille.

Mario Gomez gave the German side the lead after his tame shot squirmed under the body of keeper Elinton Andrade.

And Arjen Robben made it 2-0 after the break, playing a neat one-two with Thomas Muller before firing past Andrade from six yards out.

The winner of this tie will likely meet Real Madrid in the last four.

Madrid all but sealed their place in the semi-final with a 3-0 victory away at Apoel Nicosia on Tuesday and it looks as if the Spanish side will now meet Bayern after their result at the Stade Velodrome.

Mario Gomez's strike was his 11th goal of the current Champions League campaign and his 37th this season in all competitions.

Marseille began with third-choice keeper Andrade in goal, because of Steve Mandanda's suspension, with the Brazilian making his Champions League debut and starting his first game in 14 months.

It took fully 44 minutes for Bayern to put him under any real pressure and when they did, he crumbled.

Andrade's fumble from Gomez's tame 20-yard shot saw the ball squirm under his body and into the net to give the German side an undeserved lead at the break.

Earlier, Manuel Neuer had superbly kept out Rod Fanni's close-range header at full stretch from Mathieu Valbuena's corner before Loic Remy inexplicably sliced the follow up into the side-netting from close range.

Remy was a constant threat throughout and should have done better with an effort in the 41st minute but he struck tamely at Neuer from 20 yards following a poor Bayern clearance.

The half looked to be heading for a 0-0 stalemate before Gomez finished off a ruthless Bayern break, although Marseille felt the move should have been pulled up in its infancy following a Philipp Lahm handball in the build up.

It was Gomez's 11th goal of the current Champions League campaign and his 37th this season in all competitions.

Needing to a goal to get themselves back in the tie, Marseille went close with Andre Ayew's header straight at Neuer but by and large Bayern were the dominant force in the second half.

Gomez went close to doubling their lead but his side-footed shot from Robben's cross was well kept out by the feet of Andrade.

At the other end a mix up in the Bayern defence allowed Remy an attempt at goal, but his toe poke was straight at Neuer, who palmed the effort behind for a corner.

But with 20 minutes remaining Bayern doubled their lead, crucially scoring a second away goal with Robben slotting home from just inside the six-yard box following a delightful one-two with Muller.

That goal appeared to break the hosts' resolve and they did not look like getting one back to give them hope for the second leg as Bayern saw out a comfortable win.

Marseille coach Didier Deschamps: "There's still a chance we can go through, but it's a tiny one.

"We're not in the best position and we know Bayern are very strong at home. Players of that quality always punish you."

Bayern coach Jupp Heynckes: "We realised our objective by winning here without conceding any goals.

"Marseille play emotional football, so it was very important for us to get this result tonight."