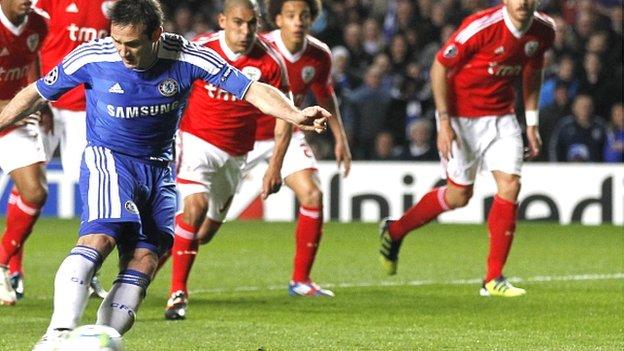 Chelsea will face Barcelona after reaching their sixth Champions League semi-final in nine years with victory over Benfica at Stamford Bridge.

Frank Lampard's first-half penalty set the platform for Chelsea's successful defence of the 1-0 lead they established in Lisbon's Stadium of Light.

And though Chelsea had to survive nervous moments in the last five minutes after Javi Garcia's header put Benfica one goal away from winning the tie, a spectacular strike from substitute Raul Meireles in the dying seconds cut short the comeback.

Chelsea's win sets up a repeat of the controversial 2009 semi-final when only Andres Iniesta's stoppage time strike at Stamford Bridge rescued Barcelona and prevented an all-Premier League meeting with Manchester United in Rome.

The Blues' performance here was hardly of the calibre to strike fear into the hearts of the holders and tournament favourites - indeed, for long spells, the fare was decidedly ordinary - but for caretaker manager Roberto di Matteo and his players it was mission accomplished.

Their opponents created chances throughout but simply lacked the cutting edge to capitalise - a task made even more difficult by the first-half dismissal of captain Maxi Pereira after he received a second yellow card for a crude challenge on Jon Obi Mikel.

But while Chelsea may not have touched the heights, their rejuvenation under caretaker Di Matteo continues as they now contemplate another semi-final to go with their FA Cup date with Tottenham at Wembley.

It is a brutal reality, however, that they will have to display infinitely greater quality than this to trouble Pep Guardiola's Catalan superstars as they battle for a place in next month's final in Munich.

The visitors opened with ambition as they chased down the deficit from the first leg in Lisbon, with the gifted Pablo Aimar prominent.

The early momentum was halted, however, by the concession of a needless penalty after 21 minutes when Garcia barged Ashley Cole to the ground. Keeper Artur touched Lampard's penalty but it carried too much power.

Benfica needed a swift response and almost got it through the dangerous Oscar Cardozo but his shot from the edge of the area was swept off the line by home captain John Terry.

Passages of the first half had been niggly, with referee Damir Skomina producing his yellow card at regular intervals. And it was red for visiting captain Pereira five minutes before the interval when, having been booked for protesting about the penalty, he received a second yellow for an ugly lunge at Mikel.

Even then, it took a fine save from Petr Cech to prevent Benfica drawing level moments after the restart, the Blues keeper showing great agility to claw away Cardozo's effort.

The game became increasingly stretched as Benfica's need for a goal became more urgent and seconds after Yannick Djalo's shot was deflected narrowly off target at one end, keeper Artur was forced to block at Kalou's feet at the other.

The visitors' threat finally brought a goal, courtesy of Garcia's glancing header in the 85th minute, but just as the prospect of a dramatic turnaround materialised, so it promptly disappeared. Meireles - taunted by the visiting fans for his connection to rivals Porto - settled the tie.

He broke away as Chelsea cleared a Benfica free-kick, keeping his composure to flash a finish past Artur to confirm another meeting with old Champions League adversaries Barcelona.