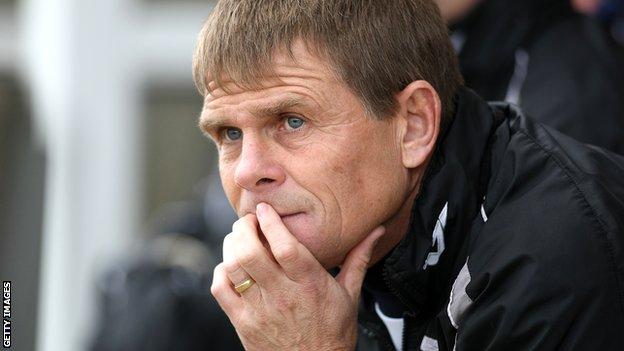 Gillingham must win six of their last seven games to make the League Two play-offs, according to their manager Andy Hessenthaler.

Their 1-0 defeat at Burton Albion on Tuesday evening left them seven points adrift of seventh-placed Cheltenham with seven games remaining.

"We're looking at six wins out of seven to confirm a place in the playoffs," Hessenthaler told BBC Radio Kent.:

"That's the challenge and it's a big challenge," the 46-year-old continued.

The victory was Burton's first since Boxing Day and Gillingham have now won only once in their last five games, but Hessenthaler insisted that the deficit to seventh place was not insurmountable.

"If we play like we did in the second half, the season is going to fizzle out," he said.

"We're not out of it. I'm sure that people who saw us tonight might laugh at that but we're not."

In order to meet Hessenthaler's target, Gillingham must beat two of the league's form teams in April.

They travel to Oxford United on 14 April and welcome title favourites Swindon Town to Priestfield a week later.