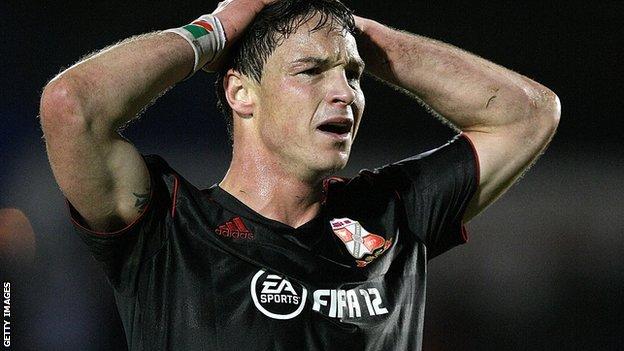 Swindon Town midfielder Oliver Risser has taken the blame for their defeat in the Johnstone's Paint Trophy final.

The Namibian, playing as a central defender in Sunday's game, scored an own goal to give Chesterfield the lead before Craig Westcarr made it 2-0.

"It happened so fast and maybe I was in the wrong position," the 31-year-old told BBC Wiltshire.

"It's even more frustrating now that I've seen it. I could have changed it and it was maybe my fault we lost."

He continued: "As soon as I touched it I saw that Wes [Foderingham] was diving the opposite side and I knew there was nobody who was going to get it out. I saw it flying into the goal and my world crumbled."

Risser signed for the Robins in the summer but has had a difficult first season at the County Ground.

He was made captain by Paolo di Canio before the start of the current campaign but lost his place in the side after a groin injury and was stripped of the skipper's armband.

Risser has made 32 appearances so far this term but has played a full 90 minutes in only 12 of those games.

He was criticised by Di Canio for his performance on Sunday, and knows he must bounce back from the disappointment in order to help the League Two leaders in their quest for promotion.

"Coming second [in the Trophy final] and also getting to the fourth round of the FA Cup is a great result but if I could have chosen it, I would have taken the medal and the cup," added Risser.

"It hurt me to to see Chesterfield lift the cup.

"The main aim is promotion but if you get a chance to win the JPT Trophy, you wouldn't say you wouldn't take it.

"But that's done and we can't change it. We have to look to the future and seal promotion as quick as possible."