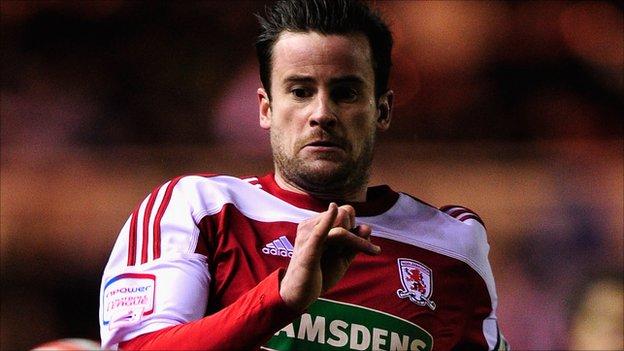 Middlesbrough manager Tony Mowbray has admitted the extent of the injuries to Matthew Bates and Seb Hines could cause problems for his squad.

Mowbray lost both Bates, 25, and Hines, 23, within the first half of Tuesday's 1-1 draw at Ipswich Town, while Rhys Williams is another absentee.

Boro have now recalled Stephen McManus from a loan spell at Bristol City.

"We can't go into the last seven games of the season with no centre-halves," Mowbray told BBC Tees.

"It's hoped Matthew hasn't got such a bad injury, so let's wait and see."

In losing Hines and captain Bates, the Teessiders were forced to shuffle their pack, and full-back Tony McMahon and midfielder Nicky Bailey were brought in as an unorthodox centre-back pairing.

"It's a huge blow to us obviously, and yet dealing with tonight's 90 minutes the players did magnificently well to overcome that and almost keep a clean sheet," Mowbray added.

"We do have a concern over Matthew's injury.

"We'll not talk about it until the injury has been scanned because we don't want to scaremonger."