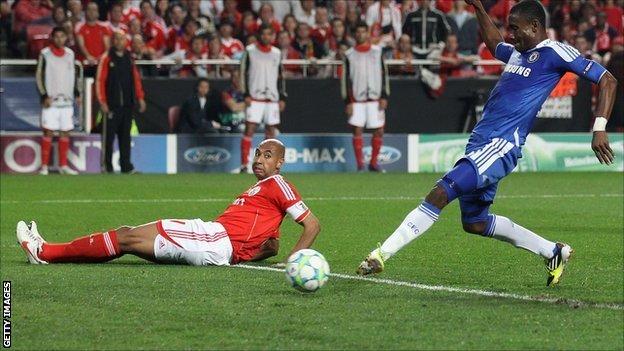 Ivory Coast and Chelsea's Salomon Kalou was coy when asked about extending his contract past the end of the season.

He scored as Chelsea beat Benfica 1-0 on Tuesday in the first leg of the Champions League quarter-final.

"For me the most important thing is not to fight for a new deal, it is just to enjoy myself with the team and play the best I can and help the team win the games we have left to play," he said.

"As long as I do that, I am fine and I am happy with myself."

The winger has been with the Stamford Bridge outfit since joining from Feyenoord in 2006, but could leave at the end of the campaign when his contract expires.

Former Chelsea manager Andre Villas-Boas claimed he had been offered a new deal before he was sacked and the 26-year-old laughed off speculation about his future after the game.

The winger was not a regular starter under Villas-Boas but he has now been given a more important role under interim manager Roberto Di Matteo.

The Italian has overseen an impressive turnaround in his short time at the Chelsea helm and Kalou has praised the new attitude at the club.

"I think the idea is to give an opportunity for everyone to show that they want to play for the club and give 100%," he said.

Such has Di Matteo's impact been that Chelsea are on the brink of the Champions League semi-finals just weeks after their European campaign seemed in tatters.

Kalou was proud to net last night's all-important goal and believes anything is possible in this season's competition.

"It means a lot to me to score," he said. "I am happy to be in the team, playing games and to score.

"I still think I can improve and if I can help teams to win games, I'd be delighted to do that.

"Anything is possible. We have the team for it, we have the players for it.

"I believe there is no reason why we could not win the Champions League."