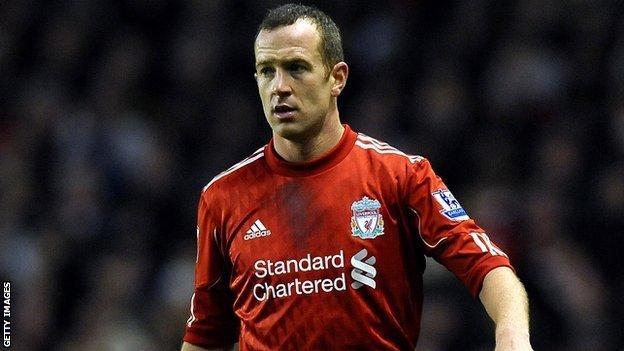 Liverpool midfielder Charlie Adam will miss the FA Cup final after being ruled out for the rest of the season with a knee injury.

The Scotland international, 26, strained knee ligaments during his side's 3-2 defeat at QPR on 21 March.

He will be absent from Liverpool's final four league games, plus the Wembley final against Chelsea on 5 May.

"There is no operation needed but he won't play this season," confirmed Reds manager Kenny Dalglish.

Adam joined Liverpool from Blackpool for an undisclosed fee in July 2011, but has scored just twice in 35 appearances for the Reds during the current campaign.

Dalglish also ruled the player out of possibly being included in the Team GB squad for London 2012.

"I would think if they had any designs on having him in the Olympics he wouldn't be fit for that either," he said.

However, Liverpool have a number of players who can play in the midfield, including Steven Gerrard, Jordan Henderson, Jonjo Shelvey and Jay Spearing.