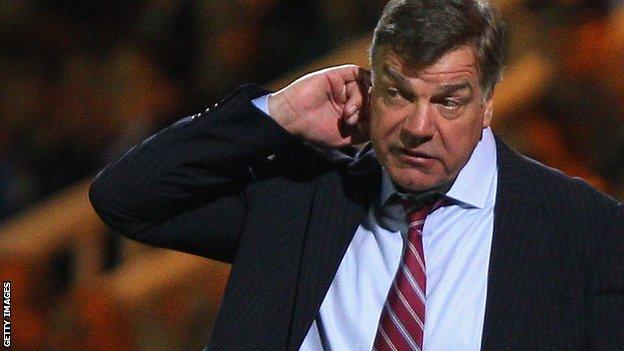 West Ham United manager Sam Allardyce has defended their recent displays after his own supporters chanted about the side's style of football.

The Hammers boss vowed to play "the West Ham way" when he took over in June but fans have voiced their displeasure at what they see as direct tactics.

Supporters at the 2-0 win at Peterbrough were heard singing, 'We're West Ham United, we play on the floor'.

But Allardyce said: "I'm sick of all that rubbish."

The victory cemented West Ham's position in third and closed the gap on second-placed Reading, who the Hammers entertain at Upton Park on Saturday.

Allardyce has been on the receiving end of vocal criticism from fans in previous home matches, something he says he has found surprising.

"I think we've lost three at home all season so I don't know why they [the fans] are not harmonious - you'll have to ask the fans that," he told BBC London 94.9.

"Perhaps their expectations are too much and they're getting a bit carried away, I don't know.

"The pressure is on us like it is every week. We have more pressure on us than anyone else, but we have to live with that and deliver, and today we did. Let's hope we do on Saturday."

The Irons have not lost since a 5-1 defeat at Ipswich Town on 31 January but a run of five consecutive draws, prior to the win over Peterborough, has seen them lose pace with leaders Southampton.

Despite the winless run Allardyce was keen to point out the encouraging performances his side have put in.

"I looked at the facts, and the facts are that at Burnley we've out-played them, out-passed them, away from home, and all the other six teams recently we've done exactly the same, that we've drawn against.

"The only team we didn't outplay was Southampton with 10 men recently, and that's probably eight games ago."

Allardyce's sides have previously attracted criticism over their style of play and the 57-year-old blamed the media and his previous team's successes for the criticism of his tactics.

"It didn't start off from there though [the media] - it started off from other managers many years ago, because they got jealous because I kept beating them.