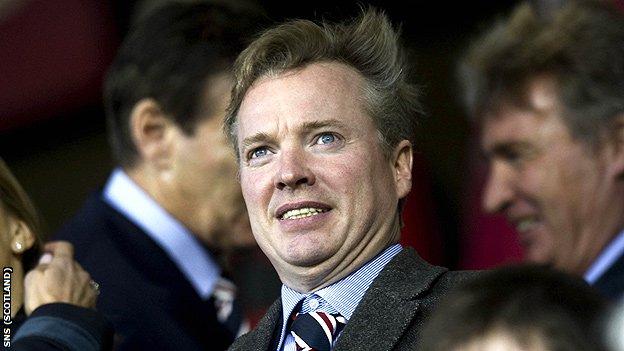 Craig Whyte has been given until 17 April to prepare for a Scottish FA hearing into whether he and Rangers breached SFA rules.

A three-man panel was due to rule after the club and Whyte were found guilty of bringing the game into disrepute and not acting in a fit and proper manner.

Rangers administrators' said they were "disappointed" by the adjournment.

Paul Clark, of administrators Duff and Phelps, said: "The club's legal representatives were ready to make the club's case which in essence is that there are extenuating and unprecedented circumstances in this case and we hope to demonstrate the distinction between the actions of the club and the actions of individuals.

"We look forward to making our case at the earliest opportunity."

The adjournment request was made by the former Rangers chairman's lawyers.

An SFA spokesman said: "Representatives for Mr Craig Whyte submitted a request by letter for further time to prepare their response to alleged breaches of the Scottish FA disciplinary rules.

"The panel adjourned the hearing, with three days set aside for both Mr Whyte and Rangers FC to attend on 17, 18 and 20 April.

"A procedural hearing has also been assigned for 6 April for Mr Whyte to lodge a substantive response and for representations to be made as to state of preparation."

The SFA charged Rangers and Whyte with seven breaches of its rules. The club is charged with five offences and the former chairman with two more between 6 May 2011 and 6 March 2012.

Lord Nimmo Smith's inquiry had found that Whyte was "not a fit and proper person" to own a football club.

SFA chief executive Stewart Regan warned when announcing these findings that the club could be charged with bringing the game into disrepute.

And he said Rangers also faced disciplinary action unless they paid money owed to Dundee United for a Scottish Cup tie at Ibrox.

The notices of complaints issued to Rangers and Whyte allege breaches of rules concerning compliance with the SFA articles, insolvency, bringing the game into disrepute and "acting in the best interests of association football".

Rangers entered administration on 14 February and Duff and Phelps are currently assessing bids to buy the club.