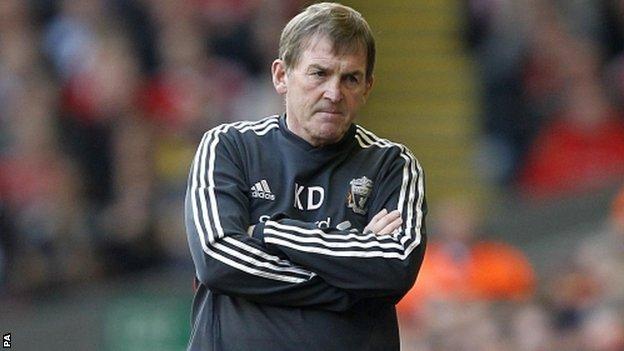 The Reds have won the Carling Cup and are in the FA Cup semi-finals but have won only two league games in 2012.

Shearer, who won the title under Dalglish at Blackburn in 1995, said: "That is disappointing, but you have to be careful in criticising Kenny.

"Liverpool entered three competitions this season and they could win two."

Dalglish takes his side to his old club Newcastle on Sunday, having lost four out of five league games since they won the Carling Cup on 26 February, and seven out of 11 since the turn of the year.

Despite their Wembley success and a resounding win in the Merseyside derby on 13 March, Dalglish has come under increased criticism from Reds supporters as their hopes of a return to the Champions League have disappeared.

Liverpool have won only two and lost seven of their last 11 league games, and won only five of 15 at Anfield all season

But Shearer, whom Dalglish signed for Blackburn for £3.3m in 1992 and also managed at Newcastle from 1997 to 1998, feels the 61-year-old's job is safe and says the Anfield club's fans should enjoy their side's successes in the knockout competitions.

Shearer told BBC Sport: "There is a big gap there and Liverpool are not going to get in the top four this season but it still could turn out to be a good one for them.

"It's there for everyone to see that their league form has not been good enough, but if they go home with two cups then that would certainly be progress, and surely that is what it is all about for Liverpool at the moment?

"If you were to ask an Arsenal fan which they would rather have, the FA Cup and the Carling Cup in the trophy cabinet or a finish in the top four, then that is a tough question for them.

"Of course Liverpool want both. Next season will be all about winning trophies and getting in the top four, because that's the size of club they are."

In contrast, Liverpool's next opponents Newcastle have overachieved this season, and sit eight points above Liverpool in sixth place.

Shearer, a Magpies legend who played for and managed the north-east club, added: "They have had a magnificent season.

"They came into it with totally different expectations to all the teams around them. Nobody thought they would be where they are now, so there is absolutely no pressure on them between now and May.

"[Manager] Alan Pardew is doing a great job and hopefully they will build on it next season. That depends on whether they keep hold of the players they have got and whether they bring new guys in over the summer to supplement them."