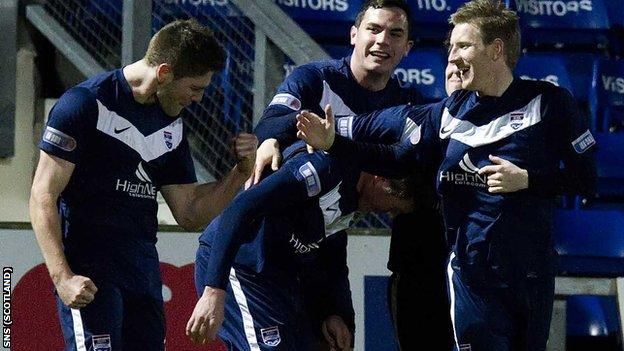 The Scottish Premier League has approved Ross County's bid to ground share with Inverness next season, should the Staggies be promoted.

The Dingwall side are 14 points clear at the top of the Scottish First Division and need two more wins to guarantee promotion.

The application to share the Caledonian Stadium was made as a back-up option.

County's Victoria Park ground is due to be renovated and the club are confident it will be ready for next season.

However, SPL rules state that all stadia must ready for the top flight by 31 March and Ross County asked for special dispensation at the league's scheduled March board meeting.

Work to meet SPL criteria will begin at Victoria Park on 1 April and is scheduled to be completed by 20 June.

"No-one at Dingwall is taking anything for granted, but plans do have to be in place.

"The work should be finished long before the end of June, but if the worst came to the worst we would like dispensation to do what Caley Thistle themselves once did, playing half the season at their own ground and half ground sharing, in their case at Pittodrie.

"It seems to me a sensible solution with a back-up plan."

Meanwhile, the Muirfield Mills consortium have agreed a deal to take a £250,000 sharholding in Inverness.

Local business director Richard Smith will join the club's board as part of the agreement.

Manager Terry Butcher said: "In the current financial climate this is a tremendous boost for us all at the club."