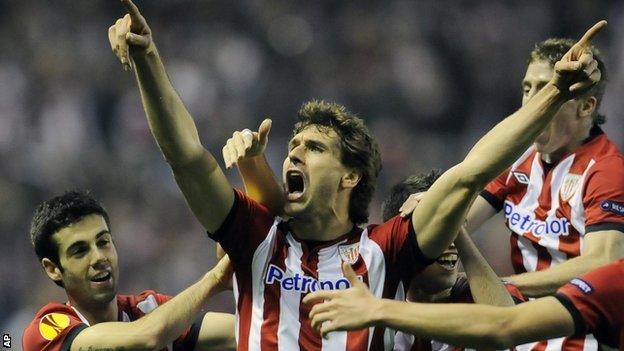 Two goals from Fernando Llorente and one each from Oscar de Marcos and Iker Muniain earned Bilbao a Europa League quarter-final first-leg win at Schalke.

Raul earlier gave Schalke a 2-1 lead with his double, before the Spanish side fought back to earn victory.

And Atletico Madrid substitute Eduardo Salvio scored in the closing stages to earn a 2-1 victory over Hannover 96.

Bilbao's victory in Germany gives them a vital advantage heading into the second leg on 5 April. Llorente had given the visitors a 20th-minute lead before former Real Madrid striker Raul equalised two minutes later.

Raul had given Schalke the lead on the hour with a fantastic left-foot volley but Spain international Llorente showed why he is so highly rated across Europe with a headed equaliser in the 73rd minute.

Bilbao took control of the tie with eight minutes remaining after De Marcos converted from close range and Muniain sealed the victory with a fine finish into the roof of the net from the edge of the area.

Alkmaar caused the biggest shock of the night with their 2-1 victory over Valencia. Aston Villa-bound striker Brett Holman gave the Dutch side a first-half lead with a volley straight from a corner before Mehmet Topal equalised in the 51st minute.

And with 11 minutes remaining Maarten Martens made it 2-1 to the hosts, side-footing Holman's cutback from six yards out to earn Alkmaar victory.

Goals this season: 25 (six in Europe)

Sporting Lisbon's win against Ukrainian side Metalist was more straightforward although the Portuguese side were made to work hard late on after conceding a 91st-minute penalty which Cleiton Xavier converted.

Earlier, Marat Izmailov's strike and Emiliano Insua's free-kick had given them a 2-0 lead.

Atletico Madrid needed a 89th-minute goal to seal victory over Hannover 96 with substitute Salvio curling a shot from the edge of the area into the top corner of the net to give them a first-leg advantage.