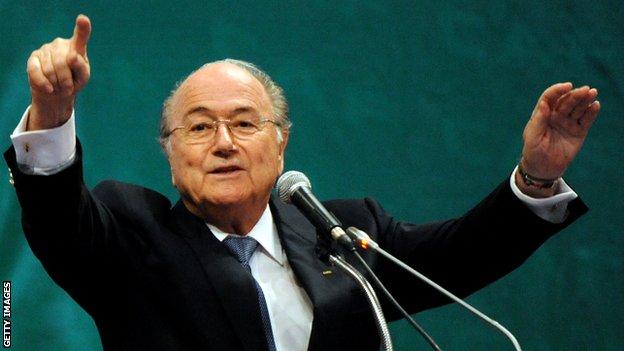 One part of the committee will investigate corruption and the other part will judge on cases brought.

But, there was no move to re-open investigations into the bids for the 2018 and 2022 World Cup.

"Among all the committees and task forces set up by Fifa president Sepp Blatter last October, the most important was the Independent Governance Committee chaired by Swiss academic Mark Pieth."

Fifa's single-chamber ethics committee failed to gather enough evidence to prosecute some allegations of vote-rigging during the 2018 and 2022 World Cup bidding contests.

A series of corruption allegations have rocked Fifa over the last 18 months, concerning both World Cup bidding and the presidential election.

The report by the Independent Governance Committee (IGC) - the body headed by Pieth which was set up last year to recommend reform proposals - was published on Friday.

As well as its recommendations it said Fifa's past investigation of corruption allegations had been "unsatisfactory", with the sanctions imposed both "insufficient and clearly unconvincing".

"The IGC has received documents and has conducted a hearing on the ways Fifa has been dealing with past misconduct," it read.

"Clearly, the existing procedures are, in the opinion of the IGC and the relevant Task Force, insufficient to meet the challenges of a major global sport governing body.

"This has led to unsatisfactory reactions to persistent allegations.

"In particular, the IGC has identified a lack of proactive and systematic investigation of allegations.

"In some instances allegations were insufficiently investigated and, where sanctions were imposed they are at times insufficient and clearly unconvincing."

Pieth's report made three main recommendations, which Fifa have already implemented in part.

These were: to set up a new powerful ethics committee with two chambers - one investigatory and one judiciary, to make decisions and rulings.

To make this ethics committee truly independent - at the moment investigations have to be approved by the Fifa general secretary.

To give the ethics committee the power to investigate past as well as future allegations of misconduct.