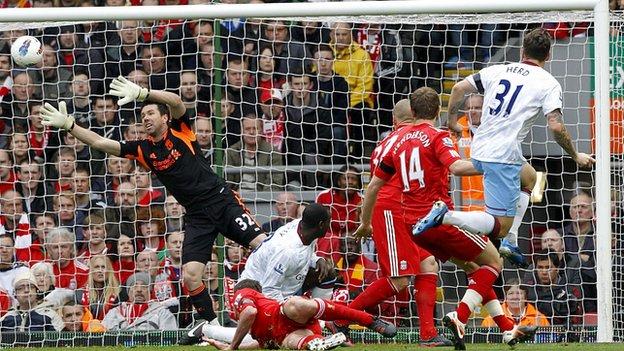 Liverpool ended a run of three defeats with a late equaliser that denied Aston Villa a precious win in their bid to ensure Premier League survival.

Villa went ahead when Chris Herd angled in a shot from Barry Bannan's cutback.

Luis Suarez had two penalty claims waved away and Reds team-mate Dirk Kuyt put a shot over from two yards.

A Suarez header hit the post before he finally got the equaliser when Daniel Agger's header came off the crossbar and the Uruguayan nodded in.

Andy Carroll then missed the chance to grab a winner when he headed straight at keeper Shay Given from six yards, before the Villa stopper fended away a powerful Gerrard shot as Liverpool finished strongly.

The point at least sends a resolute Villa six points clear of the relegation zone but leaves Liverpool with only one win in eight games, though the Reds can take some heart from the manner of their second half performance.

Before kick-off, a minute's silence marked Liverpool's last home game before the 23rd anniversary of the Hillsborough tragedy on 15 April.

When the action got under way, both teams showed how urgently they needed a win, and the hosts quickly went close.

Liverpool peppered Shay Given's goal in the second period and had three good penalty shouts. Villa hung on in there and go home with a very important point in their bid to avoid getting involved in the relegation battle. Alexander Doni on his Premier League debut had very little to do apart from pick the goal out of his goal once. Given was magnificent.

Kuyt's angled shot was smuggled away by Given, the assistant referee ruling the ball had not crossed the line.

But the Reds' recent miserable run includes defeats by Villa's fellow strugglers QPR and Wigan, and the visitors looked set to follow those examples when they took the lead inside 10 minutes.

Keeper Alexander Doni, making his debut with Pepe Reina suspended, flapped at a cross before midfielder Bannan pulled the ball back for Herd to angle a rising shot into goal.

At the other end, Herd almost helped Liverpool to an equaliser when a cross from Suarez struck his arm, but referee Michael Oliver waved away penalty appeals.

Suarez was aggrieved again as he was caught by Alan Hutton in the Villa box, Oliver again unmoved by the Uruguay striker's protests.

As Liverpool's desperation for an equaliser intensified, Kuyt missed a great chance when all he had to do was turn in a Gerrard shot from two yards but sent his effort high.

The hosts then struck the woodwork for the 33rd time this season when a Suarez header from Gerrard's inviting cross came back off the post.

And their sense of grievance grew when they were denied a penalty for a third time after Villa's Eric Lichaj appeared to handle in the area.

Gerrard's cross was headed against the crossbar by substitute Agger and, when the ball bounced in the goalmouth, Suarez was lurking to nod in his eighth league goal of the campaign.

Villa, hanging on for a point in the closing stages, might still have won it when substitute Samir Carruthers appeared to be caught by Agger in the area, but the referee gave them no more joy than he had the hosts.

Liverpool manager Kenny Dalglish: "They got the early goal and that gave them something to hold on to. They had a great deal of resolve in trying to stem the flow of the game.

"From about 20 minutes before half-time until the end of the game I think the momentum was well and truly with us. We pushed forward and got a goal but I think we deserved more than that.

"The attitude and commitment of the players was fantastic and it was a bit like the old days coming back with the crowd willing a goal into the back of the net but it wasn't to be.

"The last one [penalty shout], when Dirk Kuyt takes it on his chest and the boy [Eric Lichaj] looks at him before he's controlled it. He lifts his arms up and the referee says to Dirk he never gave it because he thought the boy was unlucky then we've no chance.

"Somebody would need to be assassinated for us to get a penalty kick."

Aston Villa manager Alex McLeish: "We went toe-to-toe with Liverpool in the first half and we took a deserved lead. I thought we had a lot of pressure at that time before, in the second half, we had to withstand a battering ram.

"We stood firm and I am so proud of the guys. All the young players in the team are lionhearts in the Villa tradition.

"It's a huge result. It would've been great if we could've hung on but there's no way I can criticise the players as they were heroes for Aston Villa."