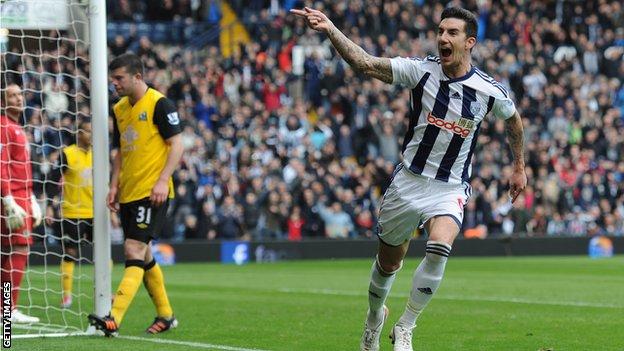 West Brom won for the first time in five matches to send Blackburn to their third defeat in a row and deeper into relegation trouble.

Martin Olsson turned into his own net after West Brom's Gareth McAuley had headed Chris Brunt's ball across goal.

A superb double-save by Ben Foster kept the scores level before Marc-Antoine Fortune drilled home at the far post.

Liam Ridgewell headed in Graham Dorrans's free-kick before Blackburn's Anthony Modeste was sent off late on.

Blackburn manager Steve Kean had said he was confident his side could repeat last season's win at The Hawthorns, but Rovers crumbled under pressure from set-pieces and lost three in a row for the third time this season.

They came up against a West Brom side that boss Roy Hodgson described as "desperate" for a victory to show they were not "winding down for the summer". That attitude showed from the first minute.

The hosts started with urgency and allowed Blackburn no space, attacking quickly down the flanks once in possession, with the full-backs pushing on.

Striker Fortune, recalled to the side at the expense of Shane Long, was the focal point. He held the ball up superbly, with Peter Odemwingie scampering off him with pace and Dorrans and Brunt finding space on the flanks.

Blackburn have picked up just one win and six points from the 20 matches in which they conceded the opening goal this season. It is the joint worst record in the division.

The pressure produced four corners inside seven minutes, from the last of which McAuley headed across goal and saw the ball turned into his own net by Olsson.

Albion continued to press and their best effort came when Odemwingie was just inches from poking home right-back Billy Jones's low cross at the back post.

Kean moved Junior Hoilett from the left wing to partner Yakubu up front for the second half and there was immediate improvement.

Hoilett cleverly laid the ball back to his new strike partner in space inside the penalty area. The Nigerian's shot was palmed away by Ben Foster but fell to Bradley Orr six yards out. He seemed certain to score but Foster produced another fine save.

The visitors were then undone by defensive mistakes, characteristic of a team who have conceded the second most goals in the league.

Yakubu carelessly gave the ball away on the corner of his area to Brunt, who curled an in-swinging cross to the back post, where Fortune was unmarked to score.

Ridgewell easily headed home Dorran's inswinging free-kick before Blackburn's day went from bad to worse as Modeste, on-loan from Bordeaux, senselessly kicked out at Jones in reaction to a tame challenge and was sent off.

"Three-nil makes it seem more comfortable than it actually was. All credit to Blackburn. I thought they did well and will feel aggrieved not to get something from the game.

"We needed some good defensive work and a fantastic save which would have put them on level terms.

"[On being 11 points clear of relegation] I think we can relax to be honest, but hopefully we don't and keep rewarding our fans with wins and let's see how high we can finish in the table."

"We were poor in the first half but came out more positive in the second half. The big point was the double save. I felt if we had scored that, with the momentum and possession, the score would have been very different.

"It is a very fine line. I've looked at the stats and we had 11 goal attempts and seven or eight on target. The goalkeeper has had a good day.

"We have a massive game against Liverpool now on Tuesday."