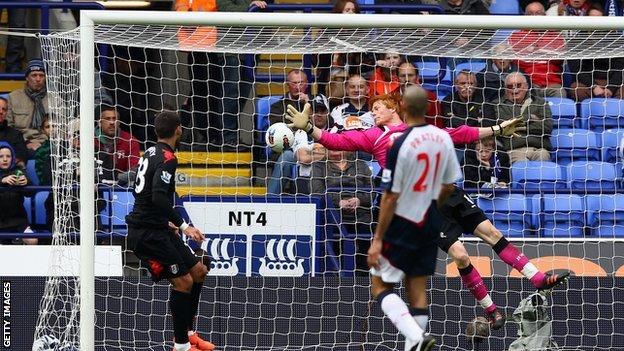 Fulham had the better of the first period and Dempsey opened the scoring with a curling, 30-yard free-kick.

The American added his second just before half-time as he headed in Damien Duff's cross from the right.

Fulham sealed the win when John Arne Riise's cross was steered in from eight yards by Mahamadou Diarra.

"A big blow to Bolton. Their run is over and it's been blown away by Fulham, who played in a relaxed manner. Clint Dempsey is scoring goals for fun."

Bolton needed the points in their bid to avoid relegation and although mid-table Fulham had far less at stake, that was not reflected in the way the match unfolded.

Fulham made a mockery of their dismal away record - they had scored only eight goals on their travels before this - while Bolton did not look like a team that was buoyant after three successive wins against relegation rivals.

Their fine form had seen Bolton manager Owen Coyle win the manager of the month award earlier in the week but the infamous curse that follows that prize duly struck.

Duff and Dempsey were key figures for Fulham, and the latter's goals took him to 15 for the season in the Premier League.

In the process he set a new club record, having previously shared the club's record tally of 13 for a Premier League season with Louis Saha.

Although Fulham had more possession in the early stages, Bolton made some promising breaks and their best early chance fell to the impressive Ryo Miyaichi, who shot over from 12 yards from Martin Petrov's cross.

Duff twice tried his luck from range for Fulham but his first shot flew wide and, when the second was charged down, Dempsey spun and shot in from 10 yards, but the goal was rightly judged off-side.

Dempsey - playing up front rather than in a wider position because of Pavel Pogrebnyak's injury - quickly rectified that disappointment with a brilliant free-kick.

It was swerving and struck with pace and, once they were in front, Fulham started playing with even more confidence and freedom.

Bolton were being cut apart by Duff and Dempsey and, after the Irishman crossed for his team-mate to head in the second, the home team left the field to boos at the interval.

Coyle responded by bringing on Chris Eagles and Kevin Davies and taking a more direct approach, but as the hosts pushed forward it gave Fulham the chance to counter-attack and Adam Bogdan twice made excellent saves to deny Duff, while Dempsey also fired wide.

But Fulham were not to be denied a third and Diarra's first goal for the club, as he applied the finishing touch to a counter-attack, completed a miserable afternoon for Bolton.

Bolton manager Owen Coyle: "We certainly didn't envisage that performance. Goals change games and Dempsey has hit a 35-yard free-kick then we gave away a soft goal.

"We have not done ourselves justice today and we'll have to take our medicine and take the criticism. It is certainly disappointing but we have to pick ourselves up.

"The level of performance that we've had recently wasn't there today. We have to bring that back."

Fulham manager Martin Jol: "It could have been four or five. I felt that we did really well. I am satisfied that we had the inspiration and motivation.

"We have had too many draws away, not scoring enough goals - that was our only problem - but Clint scored two and Diarra did so that's satisfying.

"Clint wants to be on the end of things and that's what he did with his second goal. He is a complete footballer."