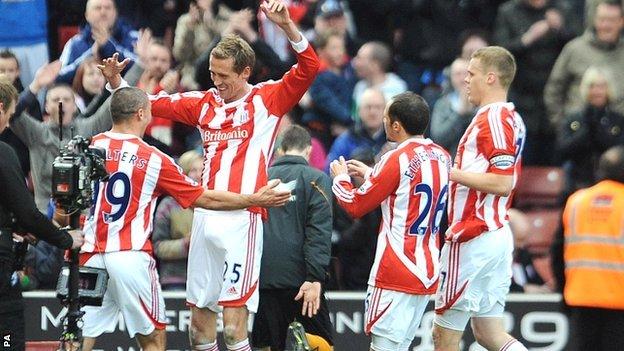 Wolves' hopes of avoiding relegation from the Premier League suffered a serious blow as Stoke came from behind to win at the Britannia Stadium.

Home keeper Asmir Begovic's error to let Michael Kightly's pass bounce past him and in to the net gave the visitors hope of snatching a vital victory.

But the lead lasted just over 10 minutes as Robert Huth hammered Stoke level from inside the box.

Terry Connor's side remain stranded at the bottom of the Premier League, six points from safety with just six games remaining - the result of a disastrous run of eight matches without a win since the former assistant manager's elevation to the hottest of Molineux seats.

With three of their relegation rivals losing earlier on Saturday, Wolves could not have asked for better circumstances to secure a confidence-boosting victory to claw their way back into the battle against the drop.

However, for all their effort - and the occasional flash of brilliance from wingers Kightly and Matt Jarvis - Wanderers simply did not demonstrate enough quality to suggest they are capable of halting their quiet slide into the Championship.

Wolves defeat is their sixth in a row in the Premier League. This is their longest losing run in the top flight since a six-match streak from March to April 1982.

But for Begovic's howler - which saw him sufficiently distracted by the run and air-shot from Dave Edwards to allow Kightly's forward pass to find the net unchallenged - the visitors would barely have tested the home keeper.

This was not from a lack of trying by the Wolves wide-men, who demonstrated an alertness their striking colleagues could not match.

Their only other opportunities came from set-pieces, one of which was headed just wide by defender Sebastien Bassong.

City were not much better. The Potters crafted clearer chances but lacked the intensity that has made the Britannia such an unhappy venue for opposition sides and they looked like a side seeing out a heavy season - this was their 50th game of the campaign.

That said, they should have led before Wolves' opener but somehow Jonathan Walters conspired to head wide from five yards with an open goal in front of him following Crouch's downward header.

After conceding, Stoke struck back quickly as Huth smashed home from 15 yards after Ryan Shawcross had chested into his path.

The second half was not an improvement on the first but it did contain the game's decisive moment as Crouch rose to loop a header over Wayne Hennessey and into the far corner of the net.

Stoke manager Tony Pulis: "We are safe and it's a fabulous achievement. The commitment and energy was fantastic.

"If Wolves can win three games on the bounce then they will change their situation. They've got a lot to play for.

"I would personally take Peter [Crouch to Euro 2012 with England]. He's a game changer. The thing with Crouchy is he scores all types of goals."

Wolves manager Terry Connor: "I think we did enough to take a draw. The lads put in a tremendous effort.

"I don't feel there was a foul committed for the winner.

"I've asked the lads for tremendous effort, which they're giving. We'll keep going until the end of the season."