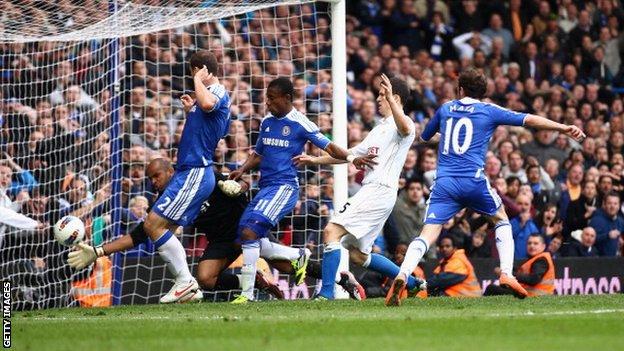 Branislav Ivanovic was in an offside position when he put Chelsea ahead in controversial circumstances after a floated pass by Raul Meireles.

Mohamed Diame appeared to have earned the visitors a priceless point when he netted from the edge of the area.

It was tough on the Latics, who remain anchored in the Premier League relegation zone, but manager Roberto Martinez will be confident his side can still escape the drop if they can produce this level of performance in their remaining six games.

While Wigan proved they were no pushovers during a battling first-half performance, Chelsea appeared to be suffering a Champions League hangover following their quarter-final victory over Benfica.

They were sluggish before Maynor Figueroa's 38th-minute clearance off the line frustrated Didier Drogba on his return, one of seven changes to the side that played in midweek.

Yet Wigan, who had failed to keep a Premier League clean sheet against Chelsea, were not troubled enough by the club hoping to overcome Barcelona in the Champions League semi-final.

Latics keeper Ali Al-Habsi was at his best to deny his former Bolton team-mate Gary Cahill from 25 yards in the 19th minute before Figueroa tested Petr Cech from distance at the other end.

Wigan have not secured a point in London since defeating Tottenham 1-0 in August 2010. Since then they have lost on all six visits to the capital, conceding 14 times.

Chelsea's frustration was evident the longer the game remained goalless.

Michael Essien was booked for a cynical foul on Victor Moses before Drogba went close with a low shot from the edge of the area which flashed narrowly wide of the Wigan post.

Then in the dying moments of the first half, Al-Habsi clawed away Drogba's goal-bound header from close range after the Ivory Coast striker had connected with Florent Malouda's teasing cross.

Al-Habsi had only managed five clean sheets before the match but he was inspirational against Chelsea.

The second half started in the same way the opening 45 minutes ended - Al-Habsi denying Drogba with his body - before the game exploded in controversy.

Shaun Maloney was cautioned for a clumsy challenge on Ivanovic, who ultimately made him pay from the resulting free-kick with a 62nd-minute opener that should have been disallowed.

Wigan thought they had cleared the danger but Raul Meireles played the ball back in to an offside Ivanovic, who steered it home.

The visitors were furious and surrounded referee Mike Jones and his assistant Dave Bryan, who were unmoved.

Then Ivanovic denied Wigan when he blocked Franco Di Santo's shot on the line after a goalmouth scramble before substitute Diame crashed an unstoppable shot into the corner of the net to make it 1-1.

But the drama was far from over, with Mata scoring in the 93rd minute after Torres brilliantly volleyed Drogba's cross against the post.