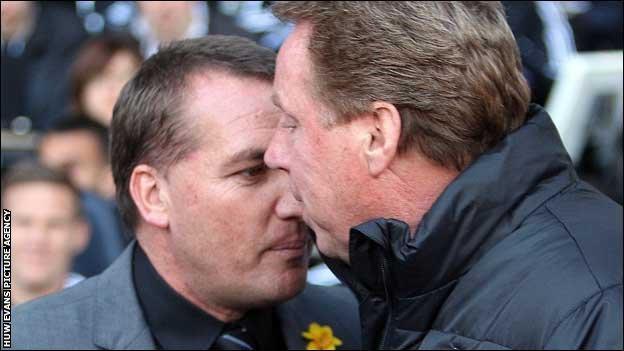 Harry Redknapp believes that Swansea City's attractive style of football should be the blueprint of how football is played in Great Britain.

Redknapp could even be the England manager by the summer as the 65-year-old is the overwhelming favourite to eventually succeed Fabio Capello.

And he said: "The way Brendan Rodgers has set them up to play is fantastic."

Rodgers guided the Swans to promotion last season through the Championship play-offs before inspiring the Welsh club to top-flight survival in their first Premier League season playing a stylish brand of pass and move football.

Swansea's philosophy has earned universal acclaim and impressive results as Rodgers' men have beaten Manchester City and Arsenal at home, as well as holding Chelsea to a draw.

And Redknapp, one of British football's most widely respected managers, feels Rodgers' fresh approach should be a prototype in a game renowned for direct and physical play.

"Any youth coach anywhere in this country should look at how Brendan has got them playing," said Redknapp.

"That's what we should be looking at in this country and encouraging kids to play that way and pass the ball because it is a fantastic way to play.

"You have to work that hard against Swansea. They pass the ball really well and make it really difficult for you. Brendan has done an amazing job there"

Rodgers became Reading Academy manager when he retired from football aged just 20 and was appointed youth team manager at Chelsea in 2004 as he worked in Jose Mourinho's backroom team.

The former Watford and Reading manager's philosophy comes from coaching experience in the Netherlands with Ajax and at Barcelona in Spain.

And Rodgers is among the favourites to replace Redknapp in the White Hart Lane hotseat should Redknapp be named the next England manager.