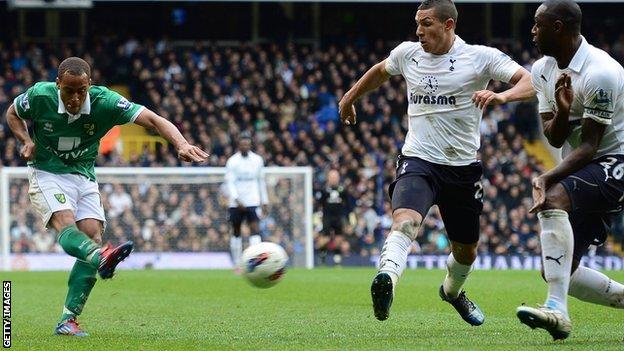 Tottenham's stuttering Premier League form continued as their challenge for a top-four spot suffered a damaging setback with defeat at home to Norwich.

Anthony Pilkington sidefooted the Canaries ahead before Grant Holt was denied a penalty for Norwich.

Jermain Defoe dinked in an equaliser and Gareth Bale hit the crossbar for the hosts before Elliott Bennett arrowed in Norwich's winner.

The loss leaves Spurs fourth, above Newcastle only on goal difference.

Newcastle beat Bolton to increase the pressure on the Londoners, while Chelsea are also hot on the heels of faltering Tottenham, who have one win from their last eight games.

After spending so much of the season looking upwards, the swashbuckling style and swagger of early season Spurs was replaced by uncertainty and frustration against a Norwich side who had the quality and verve to take advantage.

The Canaries went ahead when the home defence failed to clear their lines and Pilkington was on hand to slide in his eighth goal of the campaign.

Holt was furious referee Michael Oliver refused to then award him a penalty after Ledley King appeared to pull his shirt and his anger was compounded when Spurs immediately levelled.

"If anyone likes unpredictable football then White Hart Lane was the place to be. Norwich have pulled off a shock result which is a massive blow to Tottenham's Champions League hopes."

It was only the outstretched hand of Ruddy which then stopped Spurs taking the lead.

Tottenham left-back Benoit Assou-Ekotto broke free after a clever one-two with Emmanuel Adebayor, only to see his shot brilliantly saved by the Norwich keeper.

Tottenham's desire for a win against a Norwich side playing with energy and exuberance made for an enthralling, end-to-end game.

Norwich's top-flight security has been all but assured and, in Holt and Ruddy, the Canaries had two players who enhanced their claims for an England place in front of Spurs boss Harry Redknapp, who is tipped to take over the national team.

Another penalty claim for the visitors was turned down when Adebayor thrust his shoulder into the back of Wilbraham, before Bale cut inside and shuddered a shot against the crossbar.

The buccaneering runs of Bale and promptings of Luka Modric for Spurs have diminished as the season has worn on, while substitute Rafael van der Vaart, introduced with 20 minutes left, has also started to have less of an impact for them.

A lack of assuredness in defence, with Spurs missing holding midfielder Scott Parker, also did not help the home side and Norwich took advantage to score the winner.

Bennett ran at a backtracking Spurs backline and drove in an angled shot from the edge of the box for his first goal for the club.

Norwich boss Paul Lambert: "It was the best performance in the three years I've been here, that is the magnitude of it. I thought we were brilliant, right from the off.

"If you sit back and analyse it, it is ridiculous what has happened here.

"The club was close to folding, you inherit a group of lads you are not sure are good enough to get out of League One.

"To beat Tottenham in their own back yard is incredible for us, but the performance was right up there."