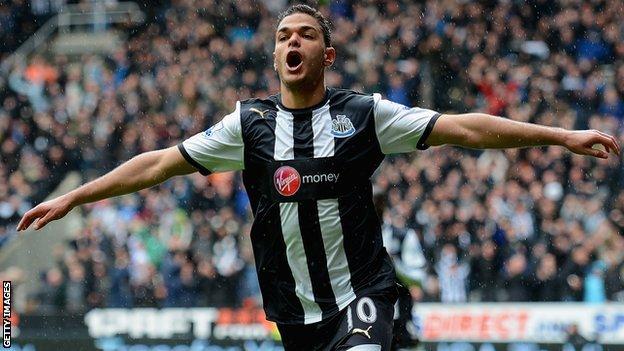 Ben Arfa turned brilliantly inside his own half and ran 70 yards before coolly beating keeper Adam Bogdan.

Papiss Cisse made it 2-0 when he tapped home substitute Shola Ameobi's cross.

Newcastle are now level on points with fourth-placed Tottenham while Bolton stay one point above the drop zone.

The game will rightly be remembered for Ben Arfa's stunning 73rd-minute solo effort but it was not in keeping with the rest of a turgid affair which saw the hosts struggle to find their rhythm.

Magpies manager Alan Pardew has regularly played down his side's chances of European qualification this season, but that stance has changed slightly in recent weeks.

Four consecutive wins had taken them to the verge of a Champions League spot, and with and Chelsea facing an FA Cup semi-final and two demanding games against Barcelona, the expectation levels have suddenly risen.

But a tired first-half display suggested Pardew's men found the pressure of chasing a top-four spot too much.

Newcastle, who switched to a 4-4-2 formation with James Perch moving into midfield to replace the injured Cheick Tiote and Fabricio Coloccini returning at centre-back, looked solid but lacked urgency and any potency in attack.

January signing Cisse, who had scored before kick-off, barely had a sniff of the ball and Bogdan cannot have had an easier 45 minutes of football.

The Hungary international keeper's only minor scare in an otherwise chanceless first period came when his punched clearance from Ben Arfa's inswinging free-kick saw the ball bounce back off Sam Ricketts and out for a corner.

Bolton, who turned in an abject display in Saturday's , were resolute, organised and grew in confidence the longer the game remained scoreless.

They barely threatened before the break but Mark Davies twice went close in the second half, forcing Tim Krul into a fine low stop and then failing to connect with a Kevin Davies cross when well placed.

The visitors felt the Senegal striker was offside but to no avail and Newcastle were able to close out the victory.

Bolton's only minor reward for a gutsy performance is the fact that they stay out of the relegation zone as none of the sides above them were in action.

"We accept Ben Arfa's finish was quality. But for our part, there was a lot to be pleased about.

"The disappointment is we are left with no points,

"But what I do know is if we offer that level of performance for the total duration of a match, then we will pick up enough points to stay in the Premier League, and that's what we have to do."