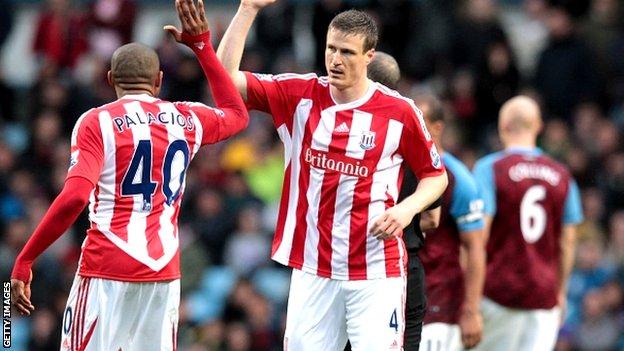 Making only his second start for the club, Weimann lit up a dour first half with a curling strike from 20 yards.

But the hosts rarely looked like doubling the lead and they were pegged back when Huth met Jermaine Pennant's free-kick with a powerful header.

Villa failed to find a winner and have won just once at home since 5 November.

They are only seven points above the relegation zone and the crowd - the smallest at Villa Park all season - made their feelings known towards boss Alex McLeish at full-time.

McLeish's side are looking up at 12th-placed Stoke, who will be happy with four points from Wolves and Villa in the space of three days.

Five of the last eight meetings between these sides - and each of the last three - have now ended in draws, and it is easy to see why.

While organised and solid at the back, both teams are plagued by a distinct lack of creativity and a regular goalscoring threat.

What is it about these two and drawing matches? This was their fifth in eight Premier League meetings, and their third stalemate in row. Villa went in front thanks to a wonderful strike by Andreas Weimann but Stoke levelled through a bullet header from Robert Huth and a draw was just about the right result.

McLeish introduced Charles N'Zogbia and Emile Heskey late on, while Stoke counterpart Tony Pulis called upon Pennant, Peter Crouch and Ricardo Fuller - but chances were at a premium.

If only there was more quality of the sort produced by Weimann.

Back in Villa's line-up after an ankle injury, the Austria Under-21 striker played a one-two with Stephen Ireland before opening up his body and superbly beating Asmir Begovic from just outside the box.

It was a goal that should have sparked Villa into life but aside from when Jon Walters almost fired into his own net, the hosts carried little threat before half-time.

In fact, they were firmly on the back foot as Stoke went in search of an equaliser - Shay Given palming away Ryan Shotton's cross, Wilson Palacios seeing a drive deflected wide and Walters heading just over.

Most of Stoke's opportunities were emanating from Rory Delap throws or set-pieces, and they went close again shortly after half-time when Huth nodded wide from a corner.

Villa might have extended their lead when Barry Bannan sent Gabriel Agbonlahor racing clear but the forward shot well wide and his side were soon made to pay for that miss.

From the moment Crouch and Pennant entered the fray, Stoke appeared more capable of troubling their opponents and so it proved after Gary Gardner fouled Pennant.

The winger picked himself up to whip a free-kick on to the head of Huth, who powered home his second goal in as many matches.

Major incidents were few and far between thereafter and Ryan Shawcross's 89th-minute strike was correctly ruled out as Pennant's corner had gone out of play before swerving back in.

Aston Villa boss Alex McLeish: "Goals talk and it will now be hard for me to leave Weimann out.

"It was a fantastic strike. We needed a bit of inspiration at that time and it was inspirational.

"It came out of nothing and was a wonderful goal from a great young prospect. He is a good finisher and we've seen it again with that goal."

"We lack a lot things but the one thing you can never criticise us for is a lack of effort.

"We were disappointed to be losing. It was a great strike by the kid (Weimann) but someone said it was their first effort on goal.

"I thought we missed some great chances and Huthy, although he's scored a great goal, should have scored off another set play in the first half. To come in 1-0 down at half-time was disappointing."