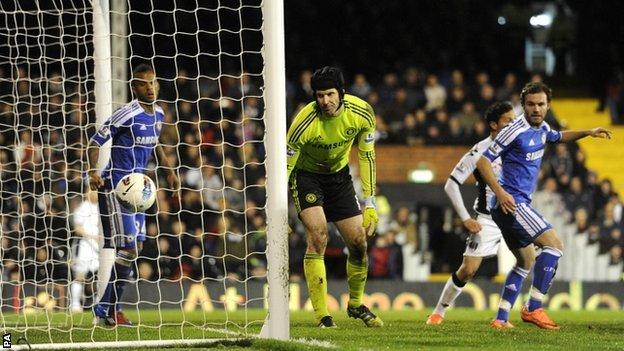 Clint Dempsey rescued a point for Fulham with his 16th league goal of the season to deal Chelsea a blow in their bid for a top-four finish.

Frank Lampard gave the visitors the lead in contentious fashion, converting a penalty after Danny Murphy was adjudged to have fouled Salomon Kalou.

The Blues failed to make their possession pay and were punished when Dempsey scored with eight minutes left.

The American headed home a corner to give Fulham a deserved point.

But Chelsea will be left to rue missed opportunities as they chase a place in the top four and guaranteed qualification for the Champions League.

On a night of driving rain at Craven Cottage the conditions made things difficult for both teams but Fulham had an early edge as they used their wide players well.

However, Chelsea survived the early pressure and then dominated possession, but they failed to create any really telling chances from open play.

With 50 games already played and FA Cup and Champions League semi-finals fast approaching, Blues boss Roberto di Matteo made six changes from the side that beat Wigan on Saturday.

John Terry, Fernando Torres and Frank Lampard all returned but they know they will need to do more against Tottenham on Sunday and Barcelona next Wednesday if the Blues are to secure any silverware this season.

With just seconds of the first half remaining the visitors, who enjoyed some good fortune as they beat Wigan on Saturday, could consider themselves lucky once again, referee Mark Clattenburg awarding a penalty for a foul by Murphy on Kalou.

The former Liverpool and England midfielder appeared to get a touch on the ball as he bought down the Chelsea striker but the referee had no hesitation in pointing to the spot.

Lampard stepped up and made no mistake, despite Fulham keeper Mark Schwarzer diving the right way, to score his 150th top-flight goal.

It gave the visitors a real purpose and they flew out of the blocks in the second half, but the pace of Frei down the left always looked a threat for Fulham and he set up Riise, who fired just wide of Petr Cech's left hand post.

Chelsea should have doubled their lead when Lampard played in a teasing cross from the left wing but Kalou missed the header and Brede Hangeland cleared the danger.

Chances were few and far between for both sides but Cech saved brilliantly from an Aaron Hughes header from close range, but the equaliser came from the resulting corner.

Fulham manager Martin Jol: "I reallly think we could have nicked a win today.

"Three points would have been fantastic but when you concede a minute before half-time like we did, then the mood in the dressing room is not great.

"I think it was a soft penalty because Danny Murphy got a touch on the ball and the referee said it was Stephen Kelly who had fouled Salomon Kalou. I think that was accidental - it was not a foul.

"But we played well, especially down the flanks, and we caused them problems. Our fitness was good, we played well and we showed some character as well."