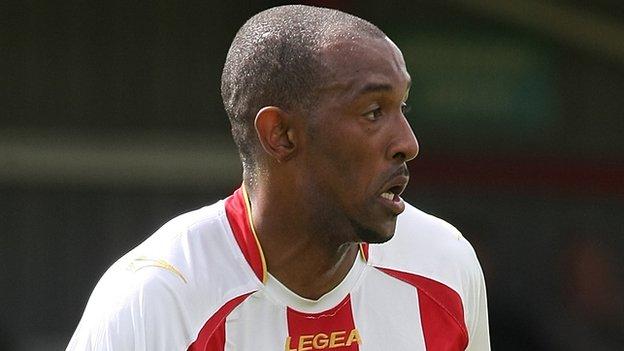 Danny Lloyd and Jefferson Louis both scored two apiece as Lincoln cruised to a victory against 10-man Darlington.

Lloyd scored the first when he tapped in after Jordan Pickford spilled Jamie Taylor's effort before Taylor headed in from Alan Power's cross for 2-0.

Louis grabbed a third with a header and Lloyd added a fourth with a powerful shot from the edge of the penalty box.

Darlington's Paul Johnson was shown a straight red card for a foul on Louis, who later headed in the fifth goal.

The Quakers, who have now failed to win in 17 matches, will be relegated from the Blue Square Bet Premier next Saturday if they fail to win at home against Bath, while Lincoln are now seven points clear of the bottom four.

"That's football. It's how you respond and how you keep your focus and I'm delighted for the players, the board and the fans.

"We were hurting after the other day [a 4-0 defeat by Stockport] and you find out about people in how they respond.

"We motivated the players and got behind them and it spoke volumes about how much they care about the club.

"Before the game I felt the anxiety but I've been in the game a long time and and I know that when you find yourself in an awkward position you stay strong, keep your belief, your mental approach and your appetite.

"When the chips are done you have to to remain focused so I'm delighted for everybody."