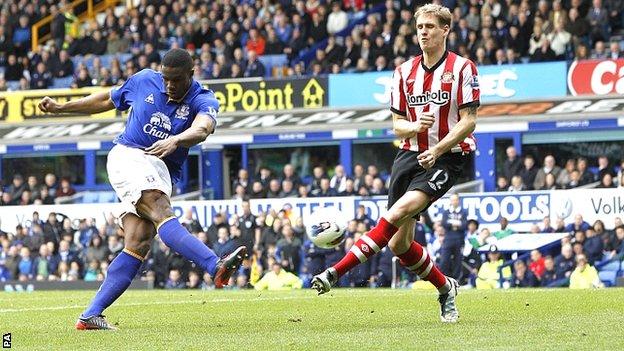 Everton warmed up for next weekend's FA Cup semi-final in style with four second-half goals in a thumping win over Sunderland.

After a dour first period, Magaye Gueye broke the deadlock when he smashed in the rebound after Simon Mignolet pushed away Leon Osman's drilled strike.

Steven Pienaar and Osman made sure of the points with identical curling shots in quick succession.

Toffees boss David Moyes clearly had one eye on his side's date with Liverpool at Wembley on Saturday, making five changes and leaving Leighton Baines, Tim Cahill and Nikica Jelavic out of his squad entirely.

The last time Moyes rested players ahead of a cup tie, it was for a Merseyside derby before his side's quarter-final against the Black Cats, and it created a storm of controversy when the Reds won 3-0.

His selection this time is unlikely to bring any complaints from Toffees fans, especially as his side still picked up their third win in their last four league games without meeting much resistance from the visitors.

Everton had dominated from the start but, until Gueye's goal, they lacked a cutting edge in the absence of Jelavic, who has scored five goals in his last eight games.

This was Sunderland boss Martin O'Neill's first defeat at Goodison Park in his 13th visit in the league as a player and manager.

Pienaar, playing in the centre of midfield, did his best to get the home side going but a combination of poor finishing and dogged Sunderland defending kept them at bay.

The South African spooned the best chance of the first half over the bar after good work from Gueye down the left, while Marouane Fellaini was also a long way off target with a close-range snap-shot.

At the other end, Sunderland's only effort of note before the break was a spectacular overhead kick from Stephane Sessegnon which flew just wide.

Martin O'Neill's side remained on the back foot after the break and it was no surprise when Everton made the breakthrough, with Gueye finding a fine finish after Mignolet could only parry Osman's shot.

Everton continued to press forward in search of further goals and Pienaar got his reward for an impressive individual display when he bent a precise shot into the corner of the net after Gueye teed him up on the edge of the area.

Just 90 seconds later, it was 3-0, with Osman popping up in the same place to fire another curling shot past Mignolet and into the net via the post.

A miserable afternoon for Sunderland was completed when, only three minutes after he had replaced Fellaini, Anichebe's strike hit Jack Colback and looped past the helpless Mignolet.