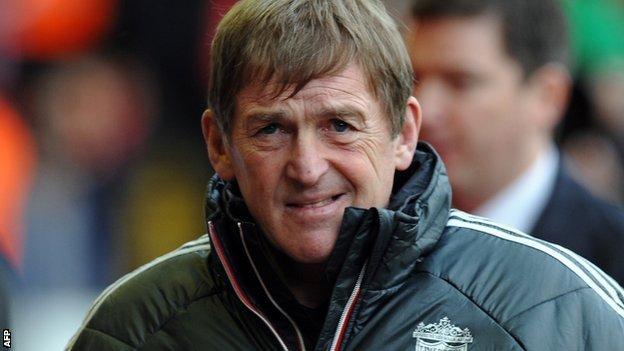 Kenny Dalglish will not quit as Liverpool manager, according to former team-mate Mark Lawrenson.

Liverpool won the Carling Cup and are in the FA Cup semi-finals but the 2-0 defeat by Newcastle was their sixth in seven Premier League games.

Lawrenson, who played alongside Dalglish in the 1980s, told BBC Radio 5 live: "I don't think he'd walk away.

"I don't believe he'll be sacked. It's a poor run, but the new owners are not going to make knee-jerk decisions."

Dalglish is adamant his squad can turn their Premier League fortunes around, saying they have got to "stick together and believe in what we're doing".

Liverpool, who have slipped to eighth in the league after Sunday's loss, meet city rivals Everton in the last four of the FA Cup at Wembley on 14 April.

BBC pundit Lawrenson added: "They could win the FA Cup this season, which would be two trophies, and that would be a strange thing to be sacked for.

"As a manager in the Premier League, it's a crisis if you lose a couple of games.

"They have Aston Villa at home at the weekend and I hate saying it's a must-win, but it is. I think [Dalglish] will be fine, but at any level, you have to win games."

Speaking on Match of the Day 3, Lawrenson pointed to the lack of impact made by Andy Carroll, Charlie Adam, Stewart Downing and Jordan Henderson, big-money signings brought in by Dalglish for a combined total of almost £85m.

"The biggest problem is Adam, Downing, Carroll and Henderson between them have contributed six league goals," said Lawrenson. "You should be looking at 25-30 goals between them."

John Barnes, who twice won the league under Dalglish at Liverpool, maintains it is too soon to write off the Scot's signings despite the club's league form being "disappointing".

But he believes Dalglish's iconic standing at the club does not mean he is immune from supporter criticism.

Liverpool have gone behind in 14 games this season and lost 78.6% of those games. Only Bolton, Swansea and West Bromwich have a worse percentage after falling behind in games

He said: "We're in the results business and Kenny Dalglish is no different to anyone else.

"If Sir Alex Ferguson goes through a run of losing games, he's going to be in trouble. No matter who you are, it's a results driven business."

Liverpool owner John W Henry, who also controls the Boston Red Sox baseball team in the United States, is likely to adopt a patient approach with Dalglish, according to Joe Sullivan, sports editor of the Boston Globe newspaper.

He said even when the seven-time World Series champions had an "extraordinary collapse" under long-term manager Terry Francona, failing to make last season's play-offs, there was not "an outright firing".

"Henry is someone who is conservative and makes moves in a thoughtful way," Sullivan added.