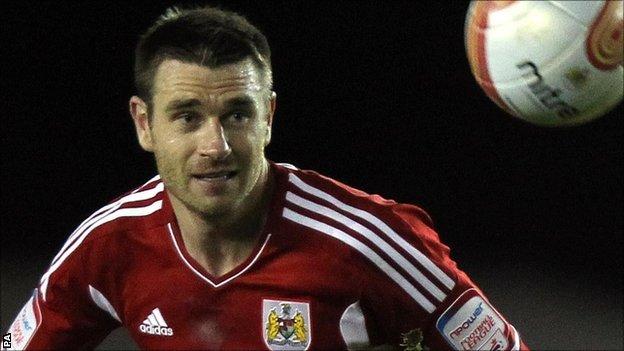 McManus, 29, joined the Robins as first-team opportunities were limited at the Riverside, but injury to Matthew Bates has opened a gap in the side.

"At the business end of the season you've got to man up and be counted," McManus told BBC Tees.

"I've always been one to do that, and I'm relishing the challenge."

The former Scotland captain was brought to the Riverside by former boss Gordon Strachan from Celtic, ironically when current boss Mowbray was in charge at Parkhead.

He began the season as a regular in Mowbray's Boro side, making 20 appearances but did not feature again after a 2-0 defeat by West Ham United in November.

Derek McInnes' appointment at Ashton Gate led to the centre-half heading for the West country in February. He made eight appearances before being recalled.

"I really enjoyed myself at Bristol City just playing games and that was the reason for that move, along with the financial benefits for the club," McManus said.

"But everybody knows that I've throughly enjoyed my time at Middlesbrough, and as soon the manager asked me to come back I had no hesitation. It was good to come straight back in and get playing."