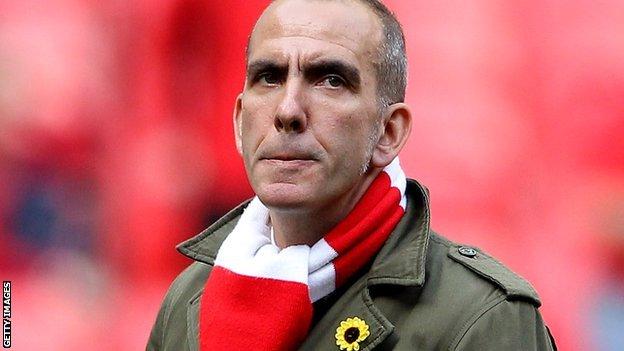 Paolo di Canio has urged Swindon fans to trust his decisions after a section of home fans were heard booing during their 0-0 draw with Bristol Rovers.

Some supporters were unhappy with the manager's decision to replace forward Alan Connell with Paul Benson after 60 minutes of Saturday's game.

"There's stupid and silly booing for no reason," he told BBC Wiltshire.

We are not Barcelona, we are Swindon. I want to remind the people that we are [in] League Two

"Stay together and think everyone who goes on the field is important, like [Lionel] Messi."

He continued: "Even if they think I'm wrong, clap the player who goes on.

"Why do the people go mad and boo sometimes? I can understand their frustration. Benson goes on and Connell comes out and they boo - it won't encourage Benson. They should pray to have Benson for the rest of their lives."

Swindon have dropped points in three of their last six games but still remain top of League Two by two points and have two games in hand over second-place Torquay.

And despite a lacklustre performance against Rovers, Di Canio insists a draw against Mark McGhee's side was not a poor result.

"They know that we played really well and deserved the win but it didn't happen," added the Italian.

"Maybe the people are sad because of this. I know this and the manager wants to win because we've been in a good habit of winning over the past three months.

"We are not Barcelona, we are Swindon. I want to remind the people that we are League Two. Sometimes we play with players who were in the Conference last season - Alan Connell, Jonathan Smith, Aden Flint.

"If we don't go up at the end of the season then they can criticise. We drew with Bristol Rovers, dominated the game and everybody is sad.

"My players can be sad but the fans should be happy because last season they were relegated and had no commitment, no discipline. My players give 200%."