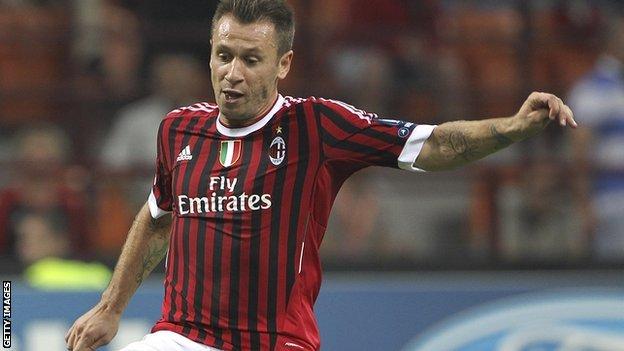 AC Milan striker Antonio Cassano has been cleared to resume playing after having heart surgery in November.

The Serie A champions said the 29-year-old was passed fit following a scientific legal evaluation at the Institute of Sports Medicine in Milan.

The Italian forward has been recovering after a procedure to close a small opening in his heart.

Cassano underwent surgery after he developed problems with vision, speech and movement.

The forward was taken ill on a plane while travelling home after Milan's 3-2 win over Roma in Serie A on 29 October.

He had tests on his heart and brain in hospital before undergoing heart surgery six days later.

Cassano resumed training by himself in January before rejoining his team-mates in training last Thursday.

The striker was Italy's top scorer in the Euro 2012 qualifiers with six goals and was a key member of Milan's championship-winning side last season.