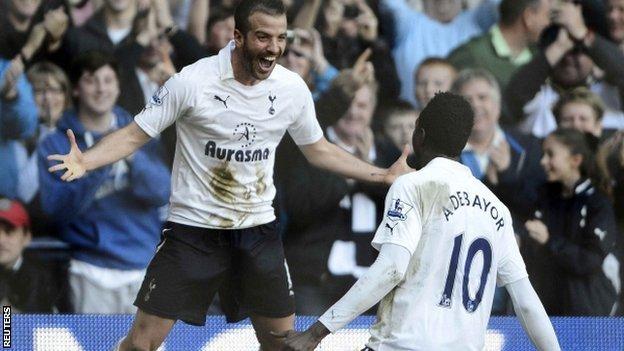 Tottenham's Rafael van der Vaart has urged the club to sign striking partner Emmanuel Adebayor permanently, but concedes wages could be a barrier.

Adebayor, who is on loan from Manchester City, impressed with a brace in the 3-1 win over Swansea on Sunday.

"I have tried to persuade him to stay," said Van der Vaart. "Last season I had a good understanding with Peter Crouch, but with him it's even better.

I think the problem is the wages. He is one of the best, a top striker.

"He's tall and strong. He's not selfish and his attitude is one of the best."

The 28-year-old Togo international signed for Spurs on a season-long loan having had an unproductive spell at the Etihad Stadium.

Since arriving at White Hart Lane, he has scored 14 goals and played a crucial role in Tottenham's push for a top four spot and a place in next season's Champions League.

Adebayor is reported to earn around £170,000 a week at City, a salary that is much higher than Spurs' top-earners take home.

However, the Dutchman insists the club must work hard to make Adebayor stay.

"I think the problem is the wages," Van der Vaart added. "He is one of the best, a top striker.

"He played for Real Madrid, for Arsenal, Manchester City. I was surprised that he came and I hope that he stays.

"He works his socks off, he's unbelievable. He's so positive. We love him here.

"Normally strikers wait for the chance and they score, but he works hard as well and even when he doesn't score, he's still important for the team. He's a big man for us."