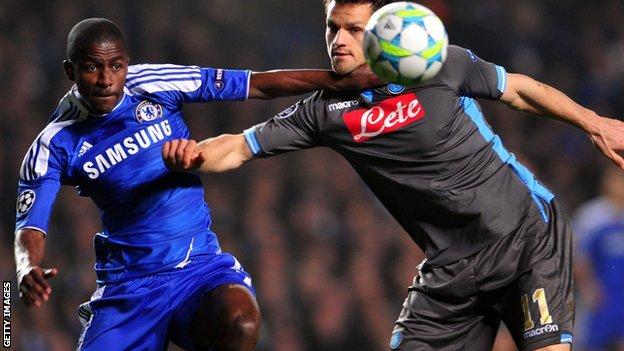 The timing with which Chelsea announced that Ramires had signed a new five-year contract last month was strange to say the least. It came just 24 hours after manager Andre Villas-Boas was shown the door at Stamford Bridge.

Suddenly, the regard in which Ramires is held at the club was clear to all. If Chelsea have hardly had a reputation for stability in recent years, the 25-year-old Brazilian has the qualities to be a constant in the chaos.

He has produced plenty of strong performance this season and another one on Wednesday - against his former club Benfica in the Champions League quarter-final second leg - could propel Chelsea into the last four of Europe's premier club competition.

Roberto di Matteo's side hold a 1-0 advantage going into the home leg at Stamford Bridge as they look to earn a meeting with Barcelona or AC Milan in the semi-finals.

A few eyebrows were raised when the Blues shelled out £18m to secure his signature in August 2010. Ramires had been at Benfica for little over a year, yet he had made a huge impression in that time as a key component of the side that won a league and league cup double.

In his late teens, Ramires regularly put in 12-hour shifts at a building site in his home city of Barra do Pirai before an evening training at Royal Sport Clube

His adaptation was immediate. He slotted in on the right side of midfield, working tirelessly at both ends of the field. Despite a punishing schedule leading up to his move to Lisbon, he scored a stoppage-time winner at Guimaraes on his official debut.

Ramires had come straight from Brazil's successful 2009 Confederations Cup campaign into a debut season in European football. "He was coming off practically two years of solid football and his whole game is based on endless running," says Tom Kundert, editor of English-language Portuguese football site Portugoal.

The indefatigable power that characterises Ramires's game first earned him the nickname of "The Blue Kenyan" while he was at Cruzeiro (the Minas Gerais side play in blue). "When I went to Benfica I became the Red Kenyan, but now I'm here, I'm the blue one again," he grinned on his arrival at Chelsea.

Ramires's work ethic comes from the nascent years of his football career. In his late teens, he regularly put in 12-hour shifts at a building site in his home city of Barra do Pirai, 80 miles from Rio de Janeiro, before an evening training at Royal Sport Clube.

On the day of his presentation at Chelsea's Cobham training complex in August 2010, he recalled being paid "80 and 100 R$ (£27-34) every 15 days". Cross-examined by one journalist on the difficulties of such a breadth of responsibility on a 17-year-old's shoulders, Ramires responded politely but firmly.

"I'm not embarrassed about any of it," he said. "It's normal to help the family." He has never forgotten where he came from. Shortly after the Confederations Cup victory, he received the award of Filho Ilustre da Cidade (Renowned Son of the City) from Barra do Pirai's mayor Jose Luiz Anchite.

Speaking at the presentation, Ramires said: "I promise to keep working and take the name of my city higher and higher." He has done just that since arriving in Europe, making his influence felt in Portugal, and now England.

"Most people say his departure is what most hurt Benfica in the ultimately disappointing 2010-11 campaign," Kundert says. This is despite the more high-profile exit of Angel di Maria to Real Madrid in that summer of 2010.

Whereas the Lisbon giants profited handsomely from his sale, they again had cause to regret his departure after last week's first leg at Estadio da Luz. Ramires put in an impressive display on his old home ground, and helped Fernando Torres create Salomon Kalou's goal in a 1-0 win.

His burst clear of Benfica midfield enforcer Javi Garcia to release Torres was typical of his energy. While Kundert says Ramires's low-key nature means he is not the "phenomenon" that fellow Benfica alumnus David Luiz is, he points out that the midfielder is still highly thought of in the red half of the Portuguese capital.

"He was well received," the Lisbon-based Kundert says. "[There was] none of the booing of former players you sometimes get. He was shown respect - perhaps too much given that he helped set up the winning goal and was man of the match!"

Ramires's last Champions League goal, in the 3-0 win over Valencia in December, showed how he has grown into the English game. Surprisingly strong despite his wiry frame, he brushed off the robust Victor Ruiz before firing home.

On that night, the Brazilian's strike earned Villas-Boas what was only a temporary reprieve from the sack. A repeat performance against Benfica would go some way to giving Roberto di Matteo's candidature to succeed him as manager a significant boost.