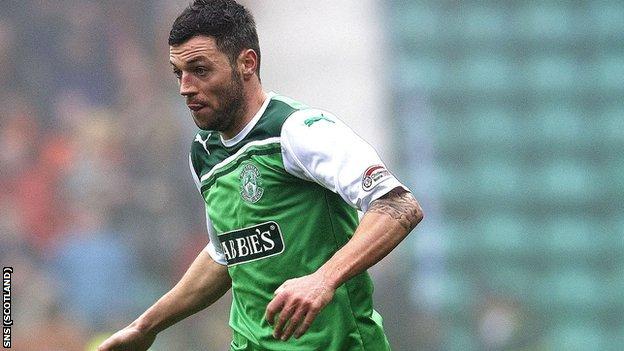 Winger Ivan Sproule admits Hibernian's season has been "a nightmare" but is confident the Leith side can stay up.

And Sproule is hopeful survival and Scottish Cup success can both be achieved, with Hibs due to face Aberdeen in the semi-final.

"It could end up one of the best seasons. I know it's a tall ask," Sproule told BBC Scotland.

"We definitely have enough to stay up. We know the job's not done yet.

We're second from bottom because we haven't been good enough

"The club is a big club, a massive club that deserves to be up there fighting at the top of the league, not down round the bottom so the players do take a lot of responsibility.

"But as a club there's been decisions made throughout these last few years that've probably culminated in the way the position is now.

"There are signs that there is going to be progression and hopefully we can finish this season out strong, stay up and we've got a lot to play for in the cup.

"The cup's the cup and it'll always give you a chance. I've been beaten three times in the semi-final so hopefully it can be fourth time lucky and getting to the final and get that big monkey off our back.

"That's the beauty of football, it'll always give you a second chance. We've got that chance and we have to hold on to that thought and hopefully give the fans and everybody that's connected with Hibs a lift coming towards the end of the season."

Sproule, who should recover from the ankle injury sustained in Inverness in time for the semi-final, accepts much of the criticism he and his team-mates have received this season has been fair.

"Criticism comes and sometimes you feel it's unjust but a lot of the criticism that's come this season we've probably had to take on the chin.

"We know the stats at home, we haven't been getting the results at Easter Road.