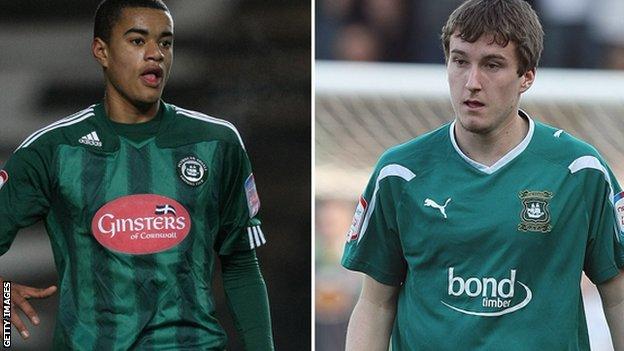 Nelson, 18, who has won an England Under-18 cap, has played 59 times for Argyle since joining the club in 2009 after being released by Stoke City.

Young, 19, has established himself in the squad since October and has played 23 times this season.

Sims, an 18-year-old attacker, has made four appearances for the League Two side this season.

The trio have all come through the youth academy ranks at Argyle.

The 51-year-old, who managed the first team from 1998-2000, takes over from Gordon Bennett who has resigned after six years in the post.

Hodges had been in charge of the club's Under-18s side for the past two years and comes as Argyle look to gain level three academy status in the summer.

"Kevin has been at Home Park, man and boy, for most of his life and knows the club from top to bottom. Argyle is in his DNA," said chief executive Martin Baker.

"That knowledge and experience, combined with Kevin's energy and enthusiasm, makes him the ideal person to succeed Gordon.

"He has a tough act to follow. Gordon has contributed much to the club, putting his own unique stamp on the youth set-up and bringing through a string of players - young talents like Dan Gosling, Joe Mason, Curtis Nelson, Luke Young, Matt Lecointe and Jared Sims.

"At the age of 66, he felt that the demands of the role were becoming too much for him, and that early morning starts to travel to away games were increasingly taxing.

"We thank him for his contribution to the Green cause and wish him all the very best for the future."