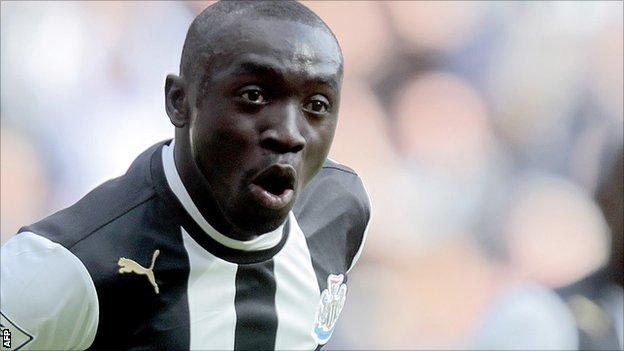 Newcastle United defender Mike Williamson has said the work-rate of striker Papiss Demba Cisse has been as crucial to the club as his goals.

Cisse scored twice against Liverpool on Sunday to take his tally to seven goals in as many games following January's £9m move from Bundesliga side Freiburg.

"He's got the quality to score some of the goals that you've seen, which is a brilliant thing to have."

Williamson added: "He makes it look so simple, he puts his work in and gets the rewards."

At the other end of the field, injuries to Steven Taylor and captain Fabricio Coloccini saw boss Alan Pardew opt for a defensive combination of Williamson and James Perch for the visit of Kenny Dalglish's side.

The reward for Pardew and his players was a clean sheet against the Merseysiders' expensively assembled strikeforce of Andy Carroll and Luis Suarez.

"Me and James are close and I think that showed today," Williamson said.

"We've got each other's back in the game, it's always pleasing to keep a clean sheet against that quality."

Three points in the 2-0 victory, their third win in succession, took the Magpies level with Chelsea in fifth, and very much in the hunt for a European place.

"We've got that momentum, it's just what we've been doing all season," added Williamson.

"We've got honest lads, we work hard and we play for each other which I think is a good mix to have."