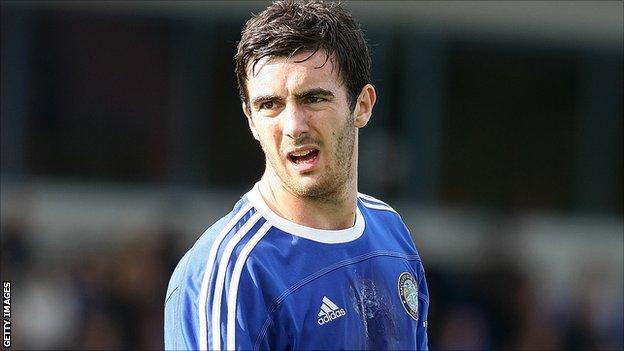 Midfielder Ross Draper is determined to play an important role in Macclesfield Town's battle to avoid relegation from the Football League.

The 23-year-old midfielder played 23 minutes of the 2-0 defeat at Gillingham on Saturday, after three months out of action with an ankle injury.

Draper told BBC Radio Manchester: "I'm not a great watcher and it's not nice to see the results go as they have.

"If anything, it's inspired me to get fit as quickly as possible."

Draper's last appearance came on 31 December, when the Silkmen were 2-1 victors against Port Vale.

Since then Macclesfield have failed to win any of their 19 matches in all competitions, 17 of them in League Two.

That run has seen them drop to second-bottom in the table, three points from safety, and resulted in the sacking of manager Gary Simpson in March.

But Draper is confident that Macclesfield can collect the points required from their final six matches to avoid relegation, starting against promotion-chasing Shrewsbury on Friday evening.

"We've got a great bunch of lads and the spirit's high," said the former Stafford Rangers and Hednesford man. "There's never any problems with that.

"Obviously when you don't win in 19 games it's hard to take. But we're doing what we can to try and get out of it. It's no good feeling sorry for ourselves.

"There are no easy games and it might be something that we need - to get a big team at the Moss Rose.

"If we can get a result, it might just give us the lift that turns our fortunes around."