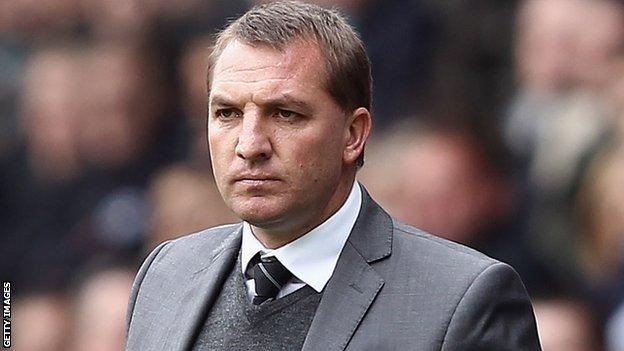 Swansea defender Neil Taylor believes Brendan Rodgers has the ability to manage one of the Premier League's top clubs in the future.

Rodgers is a leading contender to replace Harry Redknapp should the Tottenham Hotspur boss become the next England manager.

"He's going to get linked with these clubs," said Taylor.

Rodgers revealed he has a buy-out clause in the new three-and-a-half year deal he signed in February.

It is believed to be worth £4m, and Taylor added: "I think he will be a top-four manager at some point in his career.

He's bound to be linked with top clubs but I hope he doesn't go just yet. He's done a terrific job already at Swansea

"It's up to him and up to however football pans it out for him. He's definitely got a bright future."

In his first season at the helm Rodgers inspired Swansea to promotion to the Premier League following a Championship play-off final win over Reading at Wembley.

Swansea chairman Huw Jenkins has conceded they are braced for rival Premier League clubs enquiring about the highly-rated Northern Irishman.

Rodgers insists he is happy at the club and believes his challenge lies in establishing the Swans as a Premier League side.

But Wales manager Chris Coleman, a former Swansea City defender, also believes Rodgers is destined to manage at a bigger club at some point in his career.

"He can manage at a bigger club, no disrespect to Swansea City," said Coleman.

"It's because of the way Swansea City play and a lot of the top clubs play like that where they have a lot of possession.

"He's bound to be linked with top clubs but I hope he doesn't go just yet. He's done a terrific job already at Swansea City."