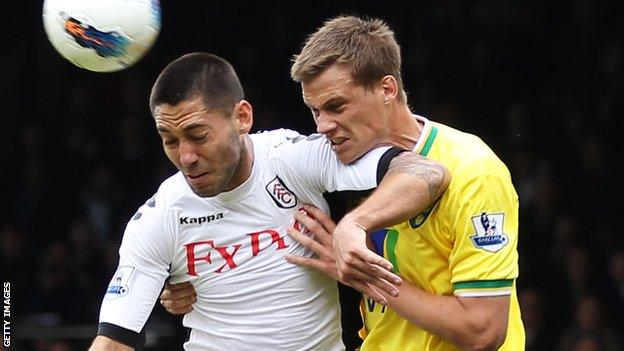 "I thought he was colossal, I really did," Lambert told BBC Radio Norfolk.

It went OK. I'd take playing a little bit worse and the team winning

"The way he played the game was outstanding. For somebody as young as that in his first Premier League game shows you why we brought him here."

The former England Under-21 international recovered from an early error, giving the ball away for Fulham's opener, to register a commanding performance at the heart of the Norwich defence.

"I thought his whole game - tackling, reading the game and using the ball - the lad was brilliant," added Lambert.

"It was a big test to come into his first game of asking at a critical time. He was very, very good. I was delighted."

Bennett, who was loaned back to Posh throughout February after agreeing a deal at Carrow Road, seemed satisfied, if not overwhelmed, by his own display.

"It went OK. It was disappointing in the first half to be two goals down," he said.

"It's nice to finally be out there. The lads have been doing well.

"It was just a matter of time and waiting until I finally got a chance. Hopefully I can continue to get some more chances before the end of the season."