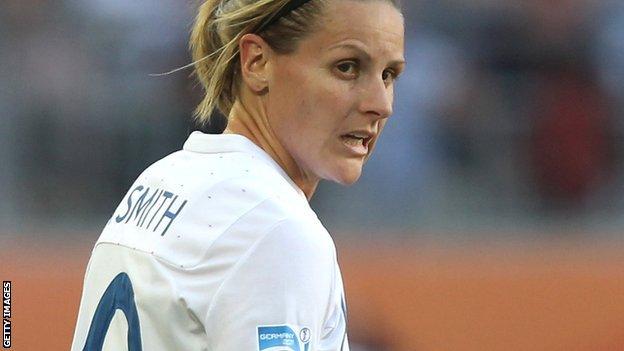 England and Arsenal's Kelly Smith faces a race to be fit for the London 2012 Olympics after worsening a stress fracture while on a video shoot.

The 33-year-old striker, who suffered a stress fracture on England duty in March, kicked a ball during the shoot and is out for two months.

Smith was supposed to be wearing a protective boot and said she took responsibility for her actions.

She added: "I'll be out for a couple of months.

"Fingers crossed. I'm positive about it - you've got to be in this day and age. It's a month or so before the squad is announced so we will see."

Smith, widely regarded as England's best player of the last decade, has only just returned to England after the suspension of the WPS league in the United States.

Her move was considered a coup for both Arsenal and the Women's Super League, which kicks off its second season on Sunday.

But the latest setback in an injury-hit career has put a dent in the Gunners' title hopes as Smith will miss the first half of the season before it breaks for the Olympics starting on 25 July.

"I broke my leg against France in the Cyprus Cup playing for England," Smith explained. "When I came back, a scan revealed a crack in a bone, from a late challenge.

"I'm definitely positive. England and Arsenal have been great, giving me rehabilitation programmes.

"I'm still in a cast at the moment. That comes off on Thursday, then the proper rehabilitation begins."

Smith, who had previously played for Arsenal before moving to the US, is England's record goalscorer with 45 goals from 111 games but she struggled with an ankle injury at the 2011 World Cup in Germany.