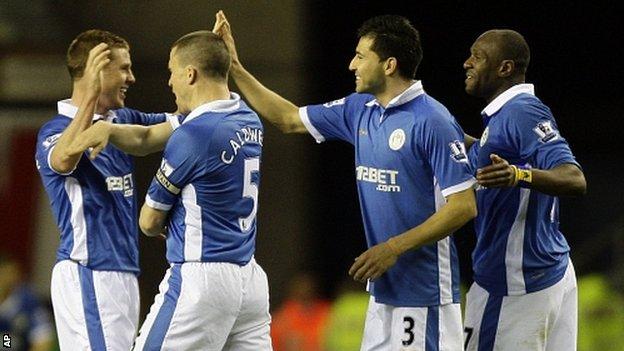 Wigan Athletic breathed fresh life into the Premier League title race and increased their own hopes of survival with victory over leaders Manchester United at DW Stadium.

Shaun Maloney's fine 20-yard finish early in the second half reduced United's lead at the top of the table to five points as Manchester City closed the gap with a comprehensive 4-0 victory over West Bromwich Albion.

And more importantly from Wigan's point of view, it was a win that moved them out of the bottom three and was richly deserved as their traditional late-season improvement gathers considerable momentum.

United looked to have opened up a decisive gap over City during the Easter period - but this was a listless, almost complacent performance that on occasions reduced manager Sir Alex Ferguson to visible anger in his technical area.

They still hold an important advantage over neighbours City - who also brought about a five-goal swing in goal difference with their win - but this was a timely and painful reminder that significant work remains to be done before a 20th title can be confirmed.

It was a display epitomised by Wayne Rooney's poor performance before he was removed by Ferguson midway through the second half, even as United desperately sought an equaliser.

Wigan boss Roberto Martinez demanded a "perfect" performance from his team after feeling they were denied at least a point by poor officiating in the defeat at Chelsea. And after winning at Liverpool and beating Stoke City recently, his side produced another outstanding display.

Martinez felt his side were victims of another injustice when Victor Moses's header was ruled out for a foul on United keeper David de Gea in the first half - although they escaped themselves when Maynor Figueroa's late handball from Phil Jones's cross was missed by the officials.

In the end United could have no serious complaints as a run of eight successive league victories came to a close with their first defeat at DW Stadium.

For the hosts, there is now the real hope of staging another escape from relegation after a season of struggle.

Paul Scholes was rested by the visitors after inspiring their win against QPR on Sunday - and the order and composure he has brought to their play since coming out of retirement was sorely missed in an awful first-half display.

Ferguson stalked his technical area furiously throughout and gestured angrily at Rooney when he tamely lost possession in a midfield tussle. The message was not well received by Rooney, but was nonetheless very clear.

The Latics were making all the running without seriously troubling United keeper De Gea until that hotly contested moment just before the half-hour after Moses headed in Jean Beausejour's corner.

The celebrations were cut short by the flag of assistant referee David Richardson, who ruled that Gary Caldwell had impeded De Gea. The decision sparked furious scenes as Martinez made his displeasure clear to the fourth official.

Displeasure will also have been in evidence inside the champions' dressing room at half-time as Ferguson reacted to his side's performance by removing Ashley Young and sending on Tom Cleverley, who enjoyed a successful loan spell at Wigan last season.

It made no immediate impact, however, and Wigan finally got the goal their endeavour and enterprise deserved after 50 minutes. Maloney worked a short corner routine with Beausejour before curling a perfect right-foot finish beyond the stretching De Gea.

Rio Ferdinand was clearly unimpressed with Rooney's part - or lack of it - in defending the corner - which replays showed should have been a goal-kick to United - and remonstrated with his colleague.

United had made no impression on Wigan's defence, leaving Ferguson no option but to ring the changes. Danny Welbeck replaced Javier Hernandez then, more surprisingly, Nani replaced Rooney after 65 minutes.

If Wigan were furious about Moses's disallowed goal, their opponents had cause for complaint with 18 minutes left when Figueroa looked to have clearly handled a Jones cross, but referee Dowd and his assistant Richardson were unmoved.

As United finally got up a head of steam, Wigan keeper Ali Al Habsi saved well from Welbeck but Moses was still proving a real handful as he forced De Gea to block with his legs then saw a shot deflected just wide.

United could not even stage their usual grandstand finish and at the final whistle the DW Stadium was awash with renewed belief that Wigan's survival bid will end in success.