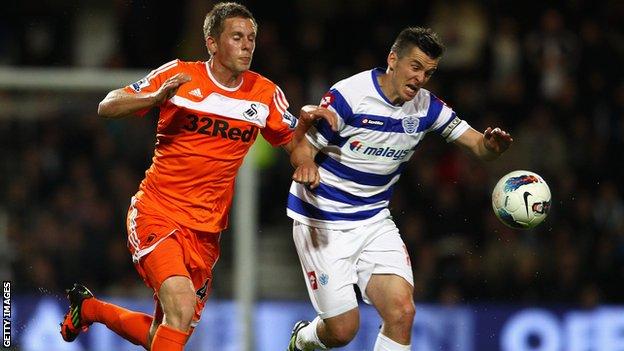 Joey Barton scored on his return to help earn QPR a two-point cushion above the relegation zone as Swansea slumped to a fourth straight defeat.

The captain marked his recall with a sublime finish after Swansea failed to clear Adel Taarabt's free kick.

Swansea were poor and Jamie Mackie added a second for QPR with an effort which deflected off Angel Rangel before Akos Buzsaky made it 3-0 from 25 yards.

Wayne Routledge had the visitors' best chance but blazed over from 12 yards.

Barton had deliberately been left out of the previous game against Manchester United, a 2-0 defeat, to avoid picking up a suspension.

But the QPR captain, who was criticised by his own supporters recently, was inspirational from start to finish on this occasion.

And QPR proved they are prepared to roll up their sleeves and battle as they established daylight between themselves and the bottom three.

Although manager Mark Hughes knows there is still an awful lot more hard work ahead if his strugglers are to avoid relegation, with three of the remaining five games against Tottenham (home), Chelsea (away) and Manchester City (away), he will have been pleased with his side's application to the job.

QPR have had seven Premier League red cards this season, including four in their last 10 top flight matches

Swansea have won an army of new admirers after bringing a breath of fresh air to the Premier League.

Yet for all their attractive play, the Welsh club have stumbled in recent weeks and arrived at Loftus Road desperate for a win to make absolutely sure of securing their top flight future.

With so much at stake it was perhaps understandable that chances were limited in a tense first half.

Barton came to his team's rescue after Taye Taiwo's attempted clearance from a Swansea corner threatened to result in an own goal while Routledge spurned a glorious chance for the visitors when he blazed over with a first-time shot.

But QPR were hungrier and more determined than their opponents.

Buzsaky flashed a volley narrowly wide while Mackie should have done better than shoot tamely at Michel Vorm before Barton broke the deadlock at the end of the half.

The former Manchester City player is not known for his goalscoring exploits but the 29-year-old produced an unstoppable finish from the edge of the area after Taarabt's free kick into the Swansea area was headed out into his path.

Swansea looked jaded and fell 2-0 behind when Mackie fired home from 25 yards with the aid of a deflection off Rangel following Anton Ferdinand's well-weighted pass.

QPR added a third through Buzsaky, the Hungarian finding the net from 25 yards with a rasping drive which gave Vorm no chance.