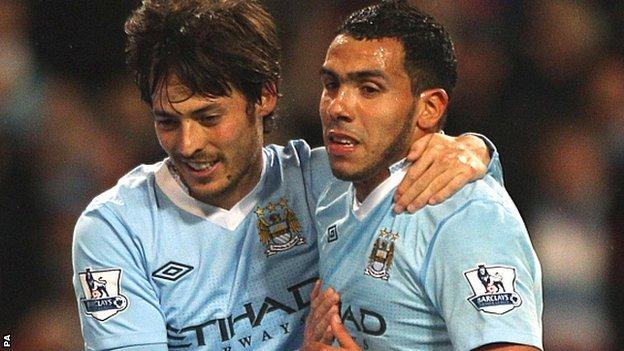 Manchester City closed the gap on Manchester United at the top of the Premier League to five points with an emphatic home win over West Brom.

Sergio Aguero struck twice to give City a commanding lead before setting up Carlos Tevez to side-foot home his first goal since May last year.

David Silva's superb chip completed the rout for the dominant home side.

Manchester United's 1-0 defeat at Wigan lets City back into a title race they were seemingly out of before kick-off.

The manner in which Roberto Mancini's side trudged from the pitch following their 1-0 loss at Arsenal at the weekend was indicative of a side who believed their hopes of a first Premier League crown were over.

However, City's Italian boss had refused to concede the title, pointing to how Chelsea closed the gap between themselves and United from nine points to three prior to facing the Red Devils three games from the end of last season.

And Mancini's belief was rewarded as his side took West Brom apart at Etihad Stadium, as Wigan were doing them a favour at the DW, and reversing the goal difference advantage in their favour by a margin of three in the process.

An inconsistent second half of the season, during which some of their star performers' influence has faded, is the reason City found themselves facing such seemingly insurmountable title odds coming into this game.

In the first half of the campaign they played some of the finest football in the division, scoring goals at will with an attacking swagger that hinged on the creative vision of Silva and the prolific Aguero.

It is no coincidence that these two played a considerable part in this victory as part of a front five that exchanged positions and possession to weave the ball at speed in and around the Albion box.

If anything, they tried to be too neat at times and often found themselves passing their way into cul-de-sacs. Some credit must go to West Brom for the way they stifled the home side in the first half, although this cost the Baggies any attacking threat at the other end.

City were most effective when more direct, as with the opening goal, which saw Aguero hold off the attentions of Keith Andrews before hammering a shot past Ben Foster from the edge of the area.

The home side continued to forge chances but had to wait until early in the second half to double their advantage when Samir Nasri's threaded ball found Aguero in the box to slot in his second.

Aguero then turned supplier for his fellow Argentine forward Tevez - starting his first game since 21 September 2011 - to side-foot his first goal in 11 months. He mis-hit his 15-yard shot and it took a deflection but Tevez will not care. Nor did the City fans, some of whom had booed the striker's every touch.

Aguero was the supplier again as Silva's delightful chip from an angle made it four. It was a moment of sheer quality and a sure sign that City have rediscovered their belief.

"It's disappointing to lose by four goals. That doesn't happen often. But we were beaten by a better team.

"It was a very dominant performance by Man City and we were always fighting to get in the game.