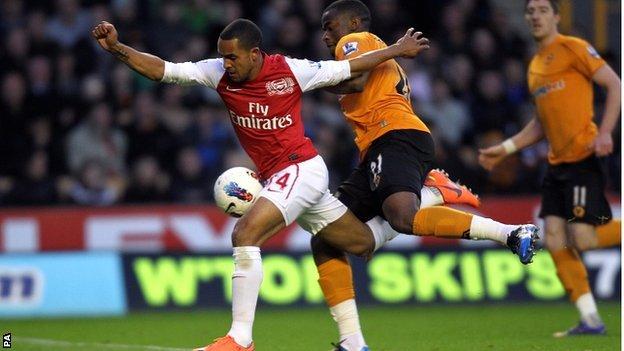 Early goals from Robin van Persie and Theo Walcott earned Arsenal victory over 10-man Wolves in a game that was largely decided within 11 minutes.

Walcott then played a neat one-two before shooting low into the net.

Wolves went closest when Wojciech Szczesny saved Kevin Doyle's header after the break, but Yossi Benayoun then converted to seal the win.

The hosts brought centre-back Christophe Berra on to replace midfielder David Davis between the two early goals, in response to Bassong's dismissal.

But such is the mood at bottom-of-the-table Wolves that the crowd greeted the substitution by directing choruses of "you don't know what you're doing" at boss Terry Connor, no matter that Berra saw a header deflected just wide from a corner soon after.

The defeat was the seventh on the trot for the hosts, who stay six points behind 19th-placed Blackburn and nine points from safety with five games left.

For Arsenal, whose fine end-of-season form continues, the result keeps them third and moves them five points ahead of fourth-placed Tottenham.

That gap could grow to eight points before Spurs play again, should the Gunners beat Wigan next Monday, and with Van Persie returning to goalscoring form after a four-game drought, they will be favourites to stay ahead of their north London rivals.

The Dutchman's cute penalty after he set Walcott free on eight minutes was his 33rd goal of the season and his 45th in 50 Premier League games.

And his combination with Walcott to set up the second goal, cutting through the home defence, effectively ended the game as a contest before it was quarter of an hour old.

The England winger scored his 11th of the season, just two short of his best tally for the Gunners, though he was booed by the home supporters for what they considered a dive for the spot-kick.

With the ironic cheers for consecutive Wolves passes and any decisions awarded to the hosts by referee Neil Swarbrick, at one stage Molineux felt more like a pantomime rather than a football match.

Yet Connor's side improved after the break as Doyle and substitute Nenad Milijas were denied by brilliant Szczesny saves.

In fairness, Arsenal's sloppiness was a factor in that revival, with Van Persie and Aaron Ramsey, starting in place of Tomas Rosicky, wasting good chances.

But once Benayoun tucked in from the edge of the area on 69 minutes, after Alex Song's pull-back, the result was confirmed.

It had looked a long road to salvation for Wolves before the game, but with Wigan and QPR both winning it may now be an impossible one.

"It is important for a striker, even like Robin van Persie who was not used to not scoring in the season, to find the net.

"He equalled the record of Ian Wright who scored against 17 different teams out of 19 in the Premier League.

"That is absolutely remarkable in the modern game to be able to do that. I'd like to congratulate him on that.

"It was overall a fantastic win. I'm very happy to be in this position but also very cautious as some teams were in the position we are in now before."