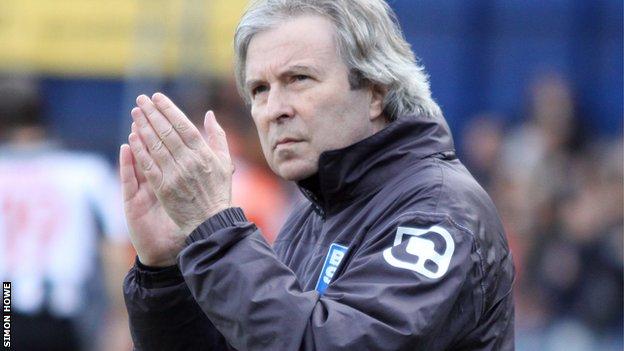 Bath City chairman Manda Rigby has confirmed she will hold talks with manager Adie Britton over his future at the relegated club.

Newport's win over York on Tuesday means the Romans are unable to escape the drop to the Blue Square Bet South next season.

Disappointed but not disconsolate, progress is not straight line it has peaks and troughs. We will return stronger for the experience.

"We need to know what he wants to do and how we take this forward," Rigby told BBC Radio Bristol.

"I'm sure he will make the best decision for both him and the club."

Britton, 58, has been with the club since 2005 - first joining as assistant to John Relish before taking over as manager in 2008.

He led Bath to victory in the play-off final against Woking to reach the Blue Square Bet Premier in 2010 and last season they finished the highest-placed part-time side in non-league in 10th position.

But this term, they have only won just five matches from 41 and their relegation was confirmed with five games still left to play.

Rigby insists that they will give their all in the remaining fixtures, with a view to finishing off the bottom of the table.

"It's the right thing to keep on fighting," she continued. "We've set ourselves another target of not ending up bottom and we've got to keep fighting for every point we can get.