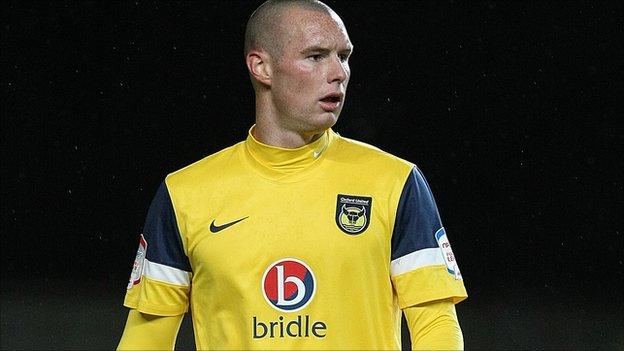 Oxford United striker James Constable is targeting a return to Wembley as his side look to seal a place in the League Two play-offs.

Constable, 27, helped fire the U's into League Two via the Blue Square Premier play-offs in the 2009-10 season.

"We've been there and done it before," he told BBC Radio Oxford.

"We need to forget about Saturday's defeat by Morecambe and play like I know we can do and I'm sure we'll be in amongst it at the end of the season."

A 2-1 loss in Oxford's last league game has all but ruled out their hopes of automatic promotion, with U's boss Chris Wilder stating it was no longer a possibility.

With six games left to play, the result leaves United seven points behind third-placed Crawley, who also have a game in hand.

But Constable, who has played at Wembley twice before, says the play-offs would hold no fear for the U's - if they can finish in the top seven.

"The experience of that (last play-off campaign) will be good for the lads," he said.

"We've got people like Alfie Potter in the changing room that can also give their experiences."

Constable says he can see similarities between this campaign and their promotion-winning season of 2009-10 and is confident of a similar result.

"With the way it worked out in previous seasons we were there or thereabouts and we slipped off and ended up going up in the play-offs," the former Kidderminster and Shrewsbury striker added.

"So as long as we are in there and fighting then come the end of the season I'm sure we'll be in with a chance and will produce the goods."