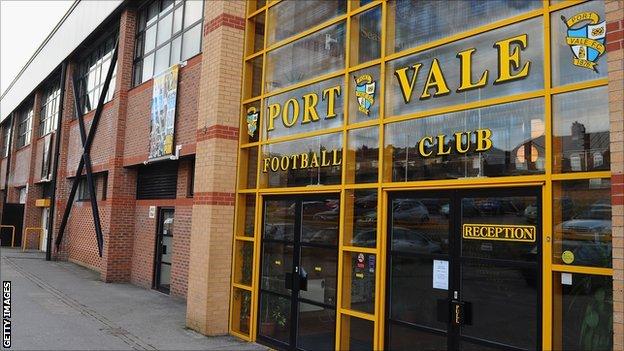 Ryder, through his company Port Vale FC Limited, was identified from a list of five official bids.

Administrator Bob Young revealed that Ryder, who has a background in property development and financial services, submitted the largest offer.

Ryder has stated that he has no desire to sell Vale Park for property ends.

Begbies Traynor expect that all relevant paperwork will be available to creditors by next week.

Ryder was unable to attend Wednesday's news conference, but did prepare a short statement, published on the club's official website.

"We at Port Vale FC are happy to be named as the preferred bidder for Port Vale Football Club," he said.

"We are excited about the future of the football club and believe the club currently has the basis infrastructure to become a Championship club.

"We will look to meet with supporters and other stakeholders in the coming weeks. We hope that fans will continue to support the Vale and together we will bring back the glory days to Burslem."

A fans forum is planned for 18 April, while a meeting between all relevant parties will take place on 26 April.

Manager Micky Adams is relieved that a potential buyer has been identified, and is looking forward to discussing the future with him as soon as possible.

"I am pleased that the process looks as though it's taking its course. I am looking forward to sitting down with him and discussing the way forward.

"There is always, in these situations, a lot of uncertainty, particularly for the players more so than myself. But it has been an unsettling period and hopefully it will be resolved sooner rather than later and we can get on with trying to produce a Port Vale team that the fans can be proud of.

"The important thing is that Keith offers direction, which owners and chairmen tend to do in terms of budgetary needs for next season and how he wants me to go about doing my job."

Vale entered administration in March after being hit with a winding-up petition due to an unpaid tax bill, as well as concerns about outstanding loan payments.

It was suggested that a total of seven bidders would come forward, but only five written bids were submitted ahead of Monday's noon deadline.

One bidder, local businessman Mo Chaudry, stated he was 'dumbfounded' by the process earlier this week.