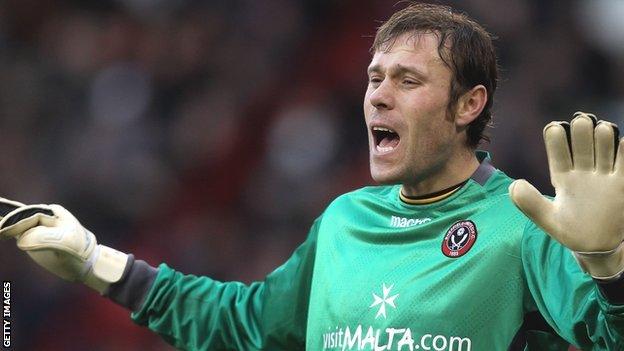 Sheffield United goalkeeper Steve Simonsen would like to stay at Bramall Lane beyond the end of his current deal, which expires in the summer.

He told BBC Radio Sheffield: "Even though last year was a disappointment I've really enjoyed my time here.

"I'd like to stay because I've enjoyed working alongside the manager and the staff that he's brought in and I'd like to continue those relationships."

The former Everton and Stoke custodian turned 33 on Tuesday and acknowledges that he is having to adapt his game as time goes by.

Simonsen has been a near ever-present for the Blades this season, having made 45 appearances.

"There's always things you need to look at changing as you get older, like maybe doing a bit less training or choosing your days off," he added.

"You know yourself what you need to do to keep going, at the moment I've got that balance spot on and I'm feeling good."