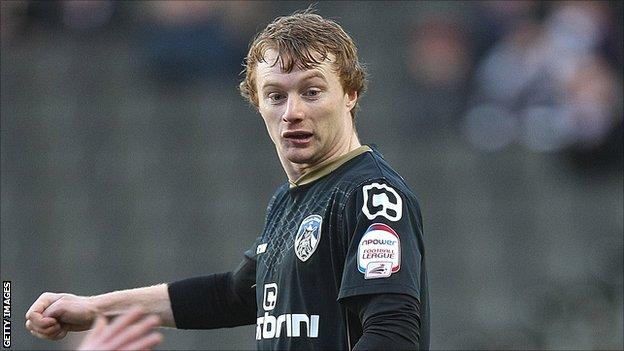 Oldham Athletic chairman Simon Corney has said he is "95% certain" that winger Chris Taylor will be leaving the club at the end of the season.

Taylor, 25, has rejected the offer of a new contract and expressed his desire to play at a higher level.

"He wants to try his luck in the Championship, so I'd be disappointed if he ended up at a League One club," Corney told BBC Radio Manchester.

Taylor was stretchered off during the 2-0 defeat at Brentford on Tuesday.

He's on a free, so why wouldn't somebody take a chance?

An X-ray revealed he has not suffered a broken ankle, but he will have further scans on the injury on Friday to determine the scale of any possible ligament damage.

It means Taylor could have played his last game for Oldham.

He has made 285 appearances for the League One club after coming through the youth system at Boundary Park, scoring 35 goals.

If the player does leave, Corney added he would depart on good terms.

"I have a lot of respect and time for Chris," he said. "He's been a fantastic servant to the club and he deserves his opportunity if he can get it.

"He's on a free, so why wouldn't somebody take a chance?

"I don't want to lose him, but those are the facts. I'm 95% certain Chris Taylor won't be here and I'll wish him all the best when he does go."