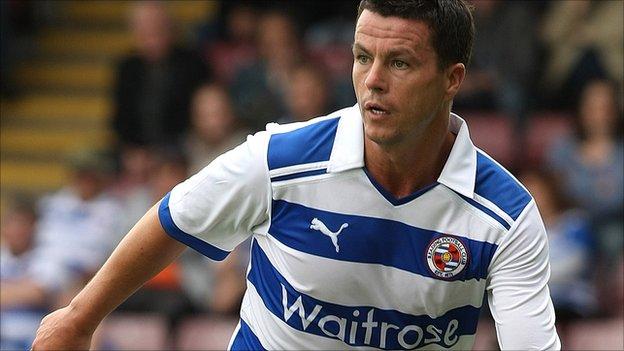 Reading defender Ian Harte admits he has six games to save his career at the Championship club and hopes winning promotion will earn him a new contract.

Harte, 34, is out of contract at the end of the season and says he has had no contact yet about a new deal.

"My contract is up at the end of these six games so I'll have to be patient," Harte told BBC Radio Berkshire.

"Hopefully if the team continues doing well it will be looked at. I'm not 24, if I was maybe it would be different."

Harte has been an integral member of a Reading side that has climbed up to second in the Championship table.

We are on a great run and teams will be fearing playing against us.

With six games to play, they are just two points off leaders Southampton and host Leeds on Friday.

The Irishman has played 28 times this season but says he has been given no guarantees about his place at the club next term.

"I just need to focus on each game and obviously if I was to win a new contract that would be fantastic," he said.

"I just need to be patient and take it from there. It is up to the gaffer and the staff to decide if I get a new contract."

Leeds are Harte's former team, and come to the Madejski Stadium on Friday for a game that is sold out.

And the defender says if Reading are to win promotion they need to win all their remaining three games.

"It should be a good game in front of a full house," he said.

"Most importantly though is that we need to keep winning and get the three points and keep the run going with six games left.

"We need to win every one of our last six games but make sure we definitely win all our last three home games.

"It will be a difficult game against a Leeds team that are up and down at the moment. But we are on a great run and teams will be fearing playing against us.

"We had a great opportunity to win promotion to the Premier League last season and we lost in the final. We are in a great position again and don't want to miss out."