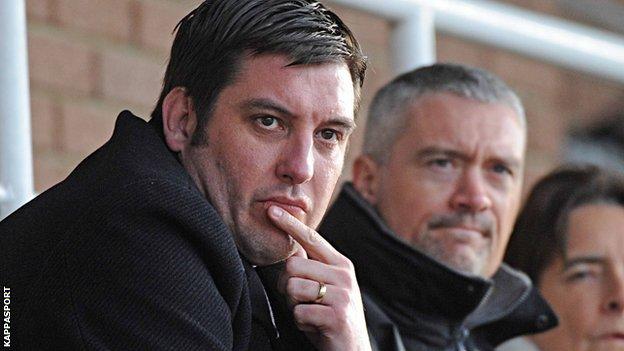 Kettering Town's George Rolls has so far interviewed three managers for next season, with caretaker boss Ashley Westwood one of those to come.

Rolls has not yet completed a full takeover at Nene Park, although he has been running affairs since March.

He told BBC Northampton: "It's a great job for someone to get. We've had an awful lot of interest.

"We've interviewed one who's managed at Championship, First and Second Division levels."

In April, the club announced that they would invite applications for the manager's role, although no appointment will be made before the end of this season.

"There's a rookie who's managed at Southern League level, and the other has been at Conference South," added Rolls.

"There's plenty more to be seen over the next few days. Obviously, I'll be sitting down with Ashley and interviewing him.

"He's in the hot seat, he's been very easy to work with and deal with. And he understands we've got to see who is the best candidate for the job."

The club escaped a winding-up order after their debt to HM Revenue & Customs was paid in late March and the hearing at the High Court was dismissed on 2 April.

If we're in Conference North [...] we'll certainly have a top six budget

As a result, current owner Imraan Ladak could sell his shares in the club to Rolls, and the former Weymouth and Cambridge chairman anticipates that happening soon.

The Kettering Town Supporters Trust have also stated they plan to accept his offer of two places on the new board and 24% shareholding.

"The first hurdle was jumped safely on Monday. Everything's on track [for me] to take over, it's just a bit of paperwork. It's just a matter of meeting up [with Ladak] when both our diaries suit.

"The Trust and I will be having a meeting next week to discuss their involvement."

On the pitch, the team are in danger of relegation from the Blue Square Bet Premier. They lie 23rd in the table, 12 points from safety with five matches to play.

"If we're in Conference North, with all indications of what we know about other teams and the money being spent, we'll certainly have a top six budget."

But the Poppies could be at risk of further demotion if they do not pay their football creditors in full by 9 June.

"The Conference would be in a position to expel us. We need to have football creditors paid off but, as part of all the budgets we've done, I don't see that being a problem.

"We've paid most of the creditors we knew of anyway. There's a little bit outstanding to the players from before my time at the club, but they've been paid every week on time for the past six weeks."

Meanwhile, the Trust have praised the fans for the £30,963 that has been raised as part of a campaign to ensure the club's survival, and say that £29,077 has been paid towards bills to keep the club afloat.