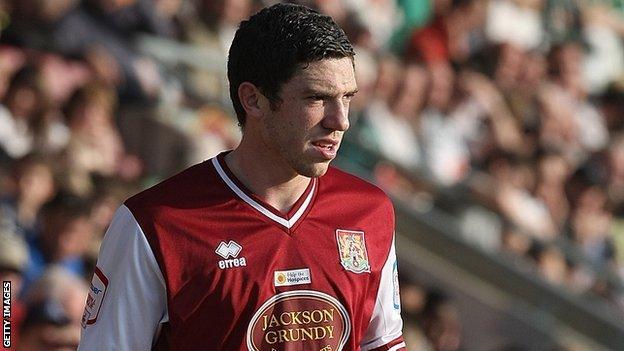 Northampton Town's Ben Tozer says the lows of results in November and the arrival of Aidy Boothroyd as manager inspired their improvement in form.

There were heavy defeats to Shrewsbury and Plymouth prior to Boothroyd's appointment. Since February, the Cobblers have lost just twice.

Tozer told BBC Northampton: "Confidence was low at times and we've come a long way. You put that down to the gaffer.

"We had to draw a line under it. The lowest would be non-league football."

He added: "I think I sat in the changing room [after losing 7-2 to Shrewsbury] for an hour," added Tozer.

"And I remember [coach] Tim Flowers' team talk after the Plymouth game.

"He's been a manager of a lower league club and he said you don't bounce back from it - look at Luton Town. That made us realise."

It's definitely a place to be for next season

Boothroyd, who had to wait six matches for his first win in charge, has made a host of changes to the squad, releasing the likes of Ashley Westwood, Chris Arthur, Bas Savage and Nick McKoy.

Clarke Carlisle, Ben Harding, Luke Guttridge and Blair Adams have been amongst the arrivals.

"Obviously he's going to bring in more players in the summer and people have got to work hard for it.

"It's definitely a place to be for next season."